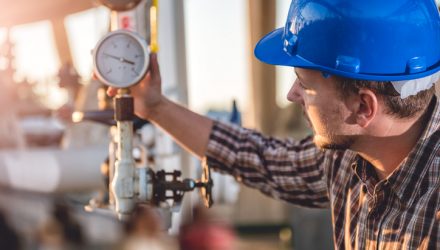 Natural gas-related ETFs led the charge on Wednesday as higher temperatures ahead fuel bets of a “notable jump” in weather-driven demand.

According to Bespoke Weather Services, weather forecasts shifted hotter overall, with the models “no longer showing nearly as much cooling” across the eastern half of the Lower 48 late next week, along with a “notable jump” in expected gas-weighted degree days, Natural Gas Intelligence reports.

“We still believe anomalous heat can continue as we move near and just beyond mid-August, with a rather persistent blocking signal favoring hotter risks across the southern half of the nation, likely giving regions such as Texas their hottest weather of the summer in the current medium-range time frame,” including near or just above triple digits on the hottest days, Bespoke Weather Services said.

Additionally, the forecaster said power burns are “seeing more high-side revisions in today’s data, climbing to their highest absolute level yet yesterday, despite lower GWDDs versus the heat we saw a couple of weeks ago. We expect strength to continue the rest of this week given a lower wind pattern in place…the totality of the data still leads us to believe there is little reason to move lower.”

Meanwhile, NatGasWeather predicts the potential for a hotter weather patterns to hit eastern United States around August 12 to 15, but it maintains a cautious outlook. Even after the hotter trends, the pattern still isn’t hot enough to impress and the forecaster retains a bearish bias.

“To our view, even if the data is a touch hotter, it’s still not a solid bullish setup since weekly storage builds are still likely to print larger than normal, allowing deficits to further improve,” NatGasWeather said.

Aggressive traders can look to capitalize in the natural gas space with the Direxion Daily Natural Gas Related Bull 3X ETF (NYSEArca: GASL). GASL seeks daily investment results equal to 300 percent of the daily performance of the ISE-Revere Natural Gas Index. The index is designed to take advantage of both event-driven news and long term trends in the natural gas industry.