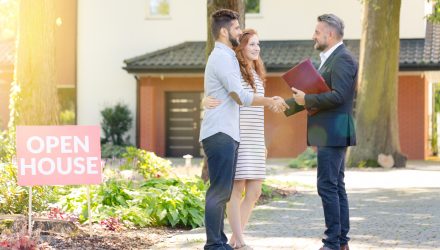 Real estate has come a long way since the Great Recession of 2008 that saw market values plummet to remarkable depths after low interest rates and subprime mortgages pushed homes to exorbitant values.

Push the fast forward button and the market is at an inflection point where low affordability as a result of higher prices combined with higher rates could signal more pain or the start of more to gain–something traders will keep on an eye on when playing leveraged real estate exchanged-traded funds like the Direxion Daily MSCI Real Est Bull 3X ETF (NYSEArca: DRN) and Direxion Daily MSCI Real Est Bear 3X ETF (NYSEArca: DRV).

During the decade-long bull run in U.S. stocks, low interest rates ruled as the real estate markets were in recovery following the credit crisis in 2008. The depressed values in U.S. real estate also attracted cash buyers from China, but even to the vast majority who used financing to purchase a home, low rates still made real estate attractive.

Now, existing homeowners are hesitant to pull out their equity built up over the last few years to refinance at today’s higher rates, while would-be homeowners scoff at the higher prices and associated costs to borrow for a mortgage. However, some real estate analysts view this current market as the new normal.

“There is a definite shift,” said Lawrence Yun, chief economist of the National Association of Realtors and fellow Forbes contributor. “I would characterize the current state as normalizing and not truly a buyer’s market. It was clearly a seller’s market in spring, but now things appear to be more balanced.”