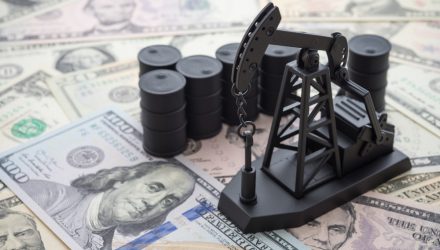 Even if the Organization of Petroleum Exporting Countries and its allies come up with a plan to cut crude production. oil markets and related ETFs will still be weighed down by plunging demand after the coronavirus outbreak upended normal life.

Depressed global demand will continue to weigh on the crude oil market. For example, India, the world’s third-biggest oil consumer, has seen demand collapse by as much as 70% as the country endures the planet’s largest national lockdown, Bloomberg reports.

It is now expected that consumption for the entire month could be half of last year’s levels, but the numbers were based on India’s three-week lockdown ending April 15 as planned. The sudden gap in demand translates to about 3.1 million barrels a day of lost oil consumption. To put that number in perspective, President Donald Trump last week said the world’s biggest crude producers sector could consider a 10 million barrel-a-day supply cut in talks this week.

“This is an unprecedented situation, I have neither seen nor heard anything like this in my entire life,” R.S. Sharma, former chairman of Oil & Natural Gas Corp., India’s biggest producer, told Bloomberg. “There’s a lot of turmoil and things are going to worsen.”

India has imposed a three-week widespread lockdown on its 1.3 billion people, the most aggressive measure taken by any government to contain the spread of coronavirus pandemic. The sudden lockdown dragged global energy markets deeper into a spiral as hopes started to rekindle on renewed Chinese demand after the world’s biggest consumer emerged from its own lockdown.

“Our demand is running at 30% to 40% of normal, varying from product to product,” Sanjiv Singh, chairman of the biggest state refiner, Indian Oil Corp, told Bloomberg. “We will get a boost when things start opening up, but probably not to the pre-COVID level. That may still take some time.”