You are at:Home»Leveraged & Inverse Channel»Triple Leveraging Strength or Weakness in Russia 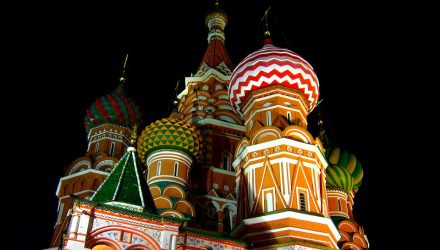 While France hoisted the trophy at the 2018 World Cup, Russia also came out as winners thanks to hosting the international soccer tournament as their economy grew by 1.8% in the second quarter, according to the Federal Statistics Service.

A lot of geopolitical relations between the United States and Russia will weigh heavily on both ETFs, as US sanctions against Russia include a potential ban on dollar transactions that involve state banks, which could set the stage for Russia to switch to other currencies in international trading. As far as the local currency goes, the Russian ruble has fallen to levels against the US dollar not seen since August 2016 following the announcement of the sanctions.

Further sanctions by the US could continue to put pressure on the Russian economy, particularly the energy sector. A bill introduced in mid-July, the Secure America from Russian Interference Act of 2018, could put a stranglehold on the Russian energy sector if it passes.

In addition, under the Chemical and Biological Weapons Control and Warfare Elimination Act (CBW Act), the US has plans to ban sales of dual-purpose technology to Russia –a response to the country’s purported involvement in the poisoning in the UK of double agent Sergei Skripal and his daughter.

Despite these looming geopolitical questions, some analysts are still positive that Russia’s economy can persevere.

“We think that the conditions are still in place for Russia’s economic recovery to gather pace in the coming quarters,” said William Jackson, an analyst at Capital Economics.

Thus far, the bulls have had the upper hand on Russia with the RUSL ETF delivering gains of about 20% within the last 12 months based on Yahoo! Finance performance numbers. RUSL has is crossing below its 50-day moving average, signaling a possible move towards bullishness if the ill effects of US sanctions are not as far-reaching as originally anticipated.