You are at:Home»Leveraged & Inverse Channel»Leveraged Brazilian ETF Continues to Rise After Dow Sells Off 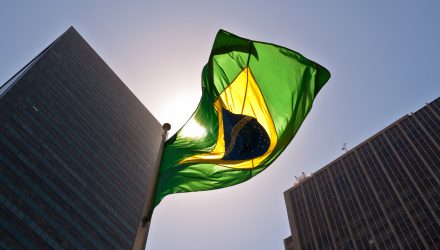 Leveraged Brazilian ETF Continues to Rise After Dow Sells Off

The surging Direxion Daily MSCI Brazil Bull 3X ETF (NYSEArca: BRZU) continued its rise after steep sell-offs in the Dow Jones Industrial Average the last two trading sessions, which left the capital markets in a daze, causing the Dow to lose over 1,300 points. BRZU wasn’t immune to the negative market contagion, but today, the leveraged ETF resumed its upward trajectory, gaining almost 6% as the country readies itself for an important presidential runoff election on October 28.

The first round of the election saw far-right presidential candidate Jair Bolsonaro take the early lead with a better-than-expected 46.7% of the votes last weekend with Fernando Haddad coming in second with 28.5%. Like U.S. President Donald Trump in 2016, Bolsonaro was billed as the wild card candidate who was a departure from political norms.

Investor interest in Brazil as of late has been evident in the performance of BRZU, which has gained 33% month-to-date. Compared to the Dow the last five days, it’s been a consistent outperformer as evidenced in the chart below: