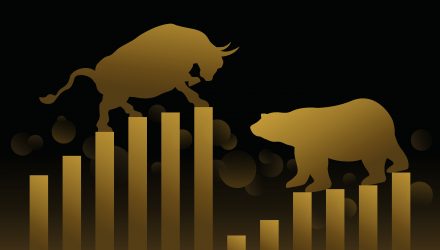 Gold bulls blame a post-midterm election rally that has fueled the greenback in addition to U.S. equities. It didn’t help much when the Federal Reserve announced on Thursday that it was keeping interest rates unchanged, but maintained a hawkish stance on an interest rate hike in December–the fourth and final rate hike to end 2018.

The Fed decision was backed by strong employment data, but languishing home sales and October’s sell-off that drenched the capital markets with volatility weren’t enough to change the central bank’s hawkish stance.

“We shouldn’t be surprised by either comment as they are simply a summary of the recent data,” Michelle Meyer, U.S. economist at Bank of America Merrill Lynch, said in a note. “Interestingly, there was no mention of the softer housing data. Moreover, there was no mention of the sell-off in the stock market in October which implies that Fed officials were largely willing to shrug it off.”

DUST can continue to be the benefactor of rising rates, which could maintain the dollar’s upward trajectory in the near term and possibly through the beginning of next year. According to the CME Group’s FedWatch Tool, there’s a 75.8% chance that the central bank will raise rates for a fourth and final time this year.