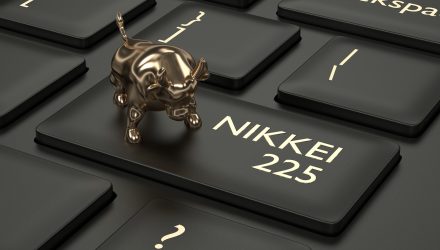 Investor Flight to Japan May Be on the Horizon

The sight of a bull may be on the horizon in the “Land of the Rising Sun” as Japan is now stepping into the fold as investors are eyeing the country for opportunities, especially after the latest sell-offs occurring in U.S. equities recently–a positive sign for capital inflows into the Direxion Daily Japan Bull 3X ETF (NYSEArca: JPNL).

“Wall Street has also outstripped the rest of the world by a stunning margin in performance terms this year, a divergence that has worried investors in recent weeks and spurred some rotation away from US equities and towards Japan and other markets,” said Michael Mackenzie of the Financial Times.

The 800-point loss in the Dow Jones Industrial Average had many investors fretting about whether the historic bull market seen in U.S. equities has finally run out of steam. As such, investors may be looking abroad for strength and that could come in the form of investments in Japan as a value play.

“Japan is one of the cheaper markets in our valuation composite,” said Binay Chandgothia of Principal Global Investors. ”

Along with a rise in its own stock market and government support for economic growth, Chad Morganlander, portfolio manager at Washington Crossing Advisors, sees these factors coming into play to spur a bull market in Japan.

“You have an accommodative monetary policy, a continuation of a fiscal push, or fiscal stimulus, you have GDP expectations that are now being revised higher so these are all tail winds for the Japanese market,” Morganlander told CNBC’s “Trading Nation” on Tuesday.

By agreeing to open trade negotiations, Japan was precluded from looming auto tariffs and American officials acquiesced to Japan’s request to not go further than its previous commitments in a multilateral trade deal known as the Trans-Pacific Partnership, allowing it to open its markets for agricultural and forestry imports from the United States.

Even if no tangible trade agreements between the two nations have materialized just yet, it prolongs Japan’s involvement in any trade wars with the U.S. as opposed to the situation with China.