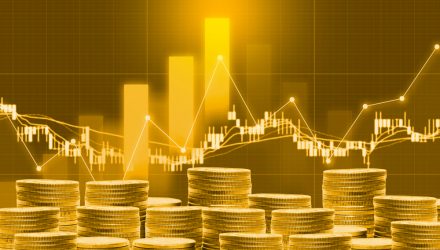 Is Institutional Investment Warming to Gold Once More?

After languishing for most of 2021, gold is seeing renewed investor interest, making way for strength in leveraged funds like the Direxion Daily Gold Miners Bull 3X ETF (NUGT).

NUGT, which is up 15% for the year, seeks daily investment results, before fees and expenses, of 200% of the daily performance of the NYSE Arca Gold Miners Index. The index is comprised of publicly traded companies that operate globally in both developed and emerging markets.

Right now, the relative strength index (RSI) shows a reading of 71.57. With crypto assets like Bitcoin faltering in recent times, a return to safe haven precious metals could by a prudent move.

Are Big Firms Jumping Back Into Gold?

A year ago, gold prices were up 20% the first week of August. Now that prices have come down to earth, institutional money could be eyeing an opportunity.

“Gold touched a more than three-month high, buoyed by signs that money managers and exchange-traded fund investors are turning more positive on the precious metal,” a Bloomberg article published in Yahoo! Finance noted. “Hedge fund managers increased their long-only position in U.S. futures and options by 12% from a week earlier, the most since June, according to government figures on Friday. Meanwhile, data compiled by Bloomberg show ETF investors have bought bullion for the past six sessions, following months of sales.”

“Prices have rebounded from lows in March as the dollar retreated and the Federal Reserve signaled it will keep interest rates low, even with signs of rising inflation,” the article added further. “Expectations for further increases in consumer prices could start to boost demand for gold as a hedge, analysts said.”