You are at:Home»Leveraged & Inverse Channel»Inflation or Stagnation? The Long & Short in Fixed Income ETFs 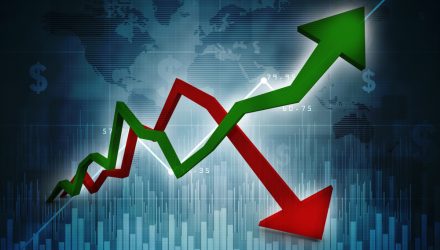 Inflation or Stagnation? The Long & Short in Fixed Income ETFs

Even before the spectacular end of the record bull market of the previous decade, fixed income was experiencing a heyday. At the close of 2019, Direxion’s two leveraged treasury ETFs, the Direxion Daily 20+ Year Treasury Bull 3X Shares (TYD) and Direxion Daily 20+ Year Treasury Bull 3X Shares (TMF), were at or near all-time highs thanks to historically low-interest rates during what was ostensibly an expansionary period.

Now, as fears of a global recession have gripped the financial world, investors have continued to put their faith in U.S. government debt, with the Federal Reserve making clear that it plans to maintain near-zero interest rates even as Congress has seemingly put their full effort into stifling the fallout of a months-long economic shutdown through several rounds of stimulus.

While even the most prescient economists can’t anticipate how these measures will play out in the coming months and years, history may provide some indication of what the cumulative effects may be on fixed-income investments. Traders with an interest in bonds and treasury notes can take their cues from prior instances of economic crisis to inform how they may want to position themselves as the economic drama unfolds.

Given the global impact of the pandemic and the cues provided by the U.S. central bank, the simplest and most intuitive course for the value of fixed income isn’t entirely different from what investors have experienced in recent history.

On their face, near-zero interest rates mean that treasury yields will likely remain depressed, which will inversely support the high price of debt instruments. And since institutions and foreign investors often use U.S. treasury notes as a de facto safeguard against the same kind of uncertainty that threatens the global economy right now, remaining long U.S. debt isn’t the most outlandish approach to the current uncertainty.

So far, this is seemingly how investors are anticipating things will play out in the near term. While fund flow in TMF surged into the negative as investors take profit from an early March spike, inflows picked up in April as the Fed clarified its intention to keep rates near-zero and even resume its bond buying program to keep state and local governments solvent.

Going forward, investors bullish on fixed income should remain steadfastly aware of signals from the Fed. Although low interest rates will be a key component to the continued value of treasury notes, the bond buying program is the committee’s heavy artillery and the core of any future growth in bond prices.

However, the other side of that coin is what would happen if the Fed ever decides to stop kicking the can down the road. In that scenario (however unlikely some may think it to be), bond yields may rise as investors retreat from the U.S. to seek better returns elsewhere, which would take a heavy toll on longer-term debt instruments.

Add to this the historic lows many commodities have sustained in the current market environment, as well as the surging unemployment figures and crippled global supply chain, and some economists are beginning to predict the resurgence of something the U.S. economy hasn’t seen much of in the past few decades: Inflation.

As far-fetched as it may seem in the midst of a potential recession, today’s economic climate has many of the ingredients for higher prices and lower buying power for average consumers. Those fears may be the engine behind heightened interest in the Direxion Daily 7-10 Year Treasury Bear 3X Shares (TYO) and Direxion Daily 20+ Year Treasury Bear 3X Shares (TMV) ETFs, which have recently seen their highest rate of daily net inflows in nearly five years.

While these factors by no means make a higher rate of inflation inevitable, there are several eventualities that could make it difficult for the Fed to remain as accommodative to borrowers as it has been in the recent past.

One possibility is that the government’s stimulus measures had their intended effect and businesses are able to rebound in the coming months and rehire most of their laid-off or furloughed workers. And an increase in demand for goods and services would result in increased demand for growth assets. Would investors really want to own bonds in that environment?

Another, much less rosy possibility, is that those bottlenecks will remain regardless of recovery. And as lockdowns are gradually lifted and consumer demand for basic needs like food and energy gradually return, prices will rise but the many unemployed consumers left in the wake of the pandemic will be simultaneously unable to afford them.

Both scenarios hinge upon the strength of consumers, something that has been taken for granted in the decade since the housing collapse of 2008, which increased Americans’ debt burdens while slashing wages and savings. These realities have largely not improved since then, and the consequences of this may prove dire in the coming months and years if consumers aren’t provided more paths to financial security.

This may bind the Fed into taking two distinct but difficult choices: ignore inflation and keep interest rates low in hopes that wages improve as companies regain their footing; or, increase rates to control inflation at the risk of fostering a recession similar to the approach taken during the 1970s and the era of stagflation. In either scenario, bond prices would likely take a hit as investors either move their funds out of government debt and into more lucrative equity markets or into safer cash equivalents.

A Matter of Time

The emphasis in any of these scenarios is timing. At the moment, the true extent of the economic fallout from the global pandemic is still manifesting. No one can say for certain how well the U.S. and world economies will fare if and when “normal” economic conditions are again reached. How companies, governments and individuals respond to the new normal will dictate the fate of, not only fixed income prices but the viability of the global economy as we’ve come to understand it, for better or worse.

For the funds’ standardized and most recent month end performance click here (www.direxion.com/etfs)

Direxion Shares Risks – An investment in the ETFs involves risk, including the possible loss of principal. The ETFs are non-diversified and include risks associated with concentration that results from an ETF’s investments in a particular industry or sector which can increase volatility. The use of derivatives such as futures contracts and swaps are subject to market risks that may cause their price to fluctuate over time. The ETFs do not attempt to, and should not be expected to, provide returns which are a multiple of the return of their respective index for periods other than a single day. For other risks including leverage, correlation, daily compounding, market volatility and risks specific to an industry or sector, please read the prospectus.