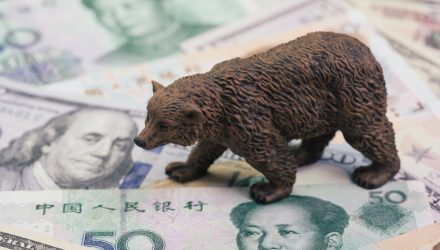 If Bearishness Is Over in China, Check Out This Leveraged ETF

China’s recent moves to curb monopolistic overtures by its big tech companies put a bearish spin on the country’s internet sector, but that could be changing.

Large tech companies like Alibaba came under scrutiny by the Chinese government, which then levied a $2.8 billion antitrust fine on the online retail giant. According to China’s antitrust regulator, Alibaba used its influence to force retailers to use its online platform.

Alibaba’s fine initially soured the taste for Chinese stocks, but that sentiment could be reversing. Technical analysis of the CSI Overseas China Internet Index could be forecasting bullishness ahead for China’s internet sector.

“The CSI Overseas China Internet Index, price performance is currently presenting a potential bullish Inverse Head & Shoulder Pattern*, shown below. Based on technicals, the index may face some resistance as it gets to the 8000 level which is around the ‘neckline’ of the pattern. Should it breach that level, technical traders may see further room to run in the short term,” a Direxion Investments “the Xchange” post noted.

“If not overtly positioning for a near-term bounce, it is clear that traders are expecting calmer seas ahead in Chinese tech stocks,” the post added. “As with any short-term event it’s never a sure thing. There are still factors that may change this course on a daily basis.” 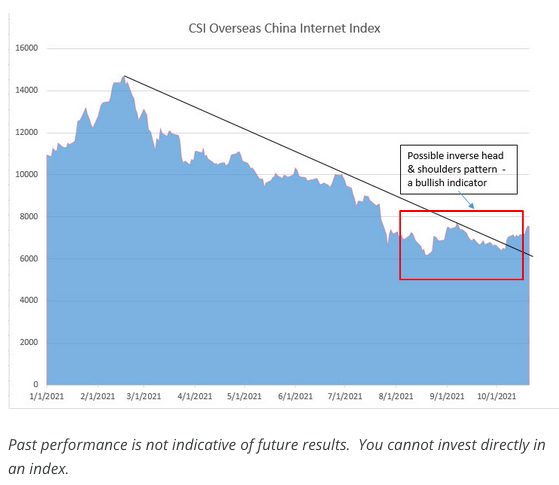 Levering Up on China’s Internet Sector

ETF traders looking for an opportunity can use the Direxion Daily CSI China Internet Bull 2X Shares (CWEB) to boost their gains. CWEB seeks daily investment results equal to 200% of the daily performance of the CSI Overseas China Internet Index, which is designed to measure the performance of the investable universe of publicly traded China-based companies whose primary business or businesses are in the internet and internet-related sectors.

Looking at its year-to-date chart, volume has seen a tremendous spike since the end of July. Since then, CWEB has slowly started to creep closer to its 50-day moving average and eventually pierced above the level within the first week of October.

Looking at its relative strength index (RSI) indicator, CWEB is starting to head back down to oversold levels again, which could open up an entry point. Bullish sentiment could be evident in its one-month performance as the fund is up 5%.