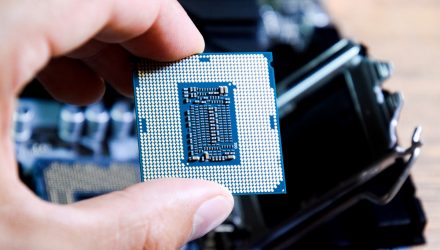 How to Prepare For a Possible Decline in Chip ETFs

Betting against semiconductor stocks and the related exchange traded funds (ETFs) has been a fool’s errand this year. Up about 35% year-to-date, the widely followed PHLX Semiconductor Sector Index proves as much.

Still, some analysts are saying semiconductor stocks are currently overbought. If investors start taking profits in the group, that could open the door for traders to capitalize on semiconductor downside with the Direxion Daily Semiconductor Bear 3X ETF (NYSEArca: SOXS). SOXS looks to deliver triple the daily inverse returns of the PHLX Semiconductor Sector Index.

This year’s rally in chip stocks “has taken the chips to their most overbought levels since January 2018. The SMH ETF’s relative strength index, a momentum measure, has stretched past 70, the level that typically indicates overbought conditions,” reports CNBC. “The last time its RSI was that high at the beginning of last year it marked a peak that preceded a 14% drop in less than three week.”

SMH is the VanEck Vectors Semiconductor ETF (NYSEArca: SMH), which is also up about 35% this year.

Some market observers believe the rally in chip stocks can continue, particularly if investors remain enthusiastic about 5G. 5G technology will use a higher frequency band versus the current 4G technology standard, resulting in faster transmission of data.

“The SMH ETF trades at 17 times forward earnings, but its constituents vary wildly. Micron Technology, for instance, trades at 8 times earnings, while Universal Display trades with an 67 times multiple,” according to CNBC.

The semiconductor space faces a slew of imminent earnings tests. For the two weeks starting Monday, April 22nd, nearly 58% of the members of the PHLX Semiconductor Index report earnings.

“On balance, little has actually changed for the semiconductor stocks and 2019’s second quarter might be the time to re-evaluate the strength of these companies, as many look to report earnings in the coming weeks,” according to Direxion. “For context, the industry’s fourth-quarter results were far from a blowout, with half of the largest components of PHLX Semiconductor Sector Index (SOX) reporting top line misses, including Intel Corporation, Advanced Micro Devices, and Qualcomm.”