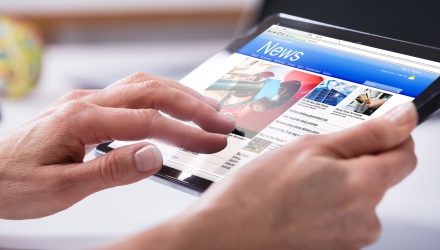 Thanks to massive mergers, property exchanges and a dramatic shift away from traditional to dynamic digital outlets, the American media landscape has narrowed drastically over the past decade. This consolidation makes the composition of the new Direxion Daily Communication Services Index Bull 3X Shares ETF (TAWK) an interesting bellwether of the average American’s media diet and paints a picture of the sector’s trajectory in the internet age.

That’s because much of the media that Americans take as ubiquitous elements of the culture, as well as their channels of delivery, all spring from only a few media conglomerates, most of which makeup the ETF’s top holdings. In less than a month of active trading, TAWK is already up significantly on the back of stellar earnings beats from most of its largest constituents.

Data Range: 1/14/2019 – 2/25/2019. Source: Bloomberg. The performance data quoted represents past performance. Past performance does not guarantee future results. The investment return and principal value of an investment will fluctuate. An investor’s shares, when redeemed, may be worth more or less than their original cost; current performance may be lower or higher than the performance quoted. For standardized performance and the most recent month-end performance, click here.

To give you an idea of just how pervasive these companies are, here’s a rundown of some basic facts regarding the ETFs’ top holdings:

Leaving aside the question of whether that spread is healthy from a consumer standpoint, the above illustrates the modern media landscape. Specialization within a particular subset of the industry is becoming rarer, and the companies finding the most success are those that are vertically integrated across the consumer chain. Just look at the performance this decade of a company like Dish, which has remained relatively stagnant, compared to performance of the conglomerate that Comcast has become.

Of course, the area that has the most attention right now is who can catch the most cord cutters. With Disney planning to roll out its streaming service over the next year and AT&T reportedly corralling all of its properties for a planned, subscription-based entertainment ecosystem, the pressure on Netflix to maintain its lead in OTT market share is only going to increase.

The Race For 5G Superiority

AT&T and Verizon both have a long history of mergers in an attempt to expand their customer reach, both with varying degrees of success. But where in prior years the main focus may have been on acquiring content (see: Yahoo, Time Warner, and others) 5G data networks are the new battlegrounds, and everybody is burning cash to be the first to claim priority. AT&T is set to repeat its 2018 spending of more than $21 billion on expanding its new data network, while Verizon is upping its funds to about $18 billion in an attempt to make up some ground on its rival.

It’s going to take time for the modern media wars to shakeout. While the tech upstarts might be able to make a run for the media throne, it’s almost certain that the legacy companies won’t die by obsolescence. Instead, they’ll all simply be bought and swallowed for parts. The question remains who will be the predators, and who will be the prey.