You are at:Home»Leveraged & Inverse Channel»Gold Trading Lower, But It Won’t Last for Long 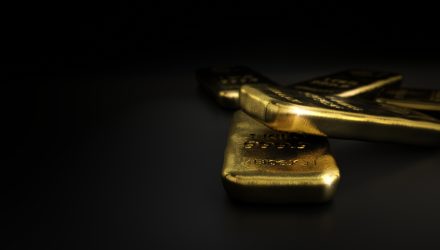 Gold Trading Lower, But It Won’t Last for Long

Positive economic news is flooding the capital markets while major indexes like the S&P 500 and Dow Jones Industrial Average are surpassing new highs. All this creates less demand for safe haven assets, which is pushing gold prices lower, but some analysts feel it won’t last for long.

Per a Kitco News report, “the Institute of Supply Management (ISM) said that its Non-Manufacturing Purchasing Managers Index rose to a reading of 54.7% in October, up from September’s 52.6%. The data beat economist forecasts as the consensus called for the index to come in at 53.5%.”

“As soon as you saw those ISM numbers you had to get out of gold,” said Phillip Streible, senior market analyst at RJO Futures told Kitco News. “The better than expected data has created some upbeat sentiment among investors and that is hurting gold.”

“The Fed has told us that they are not going to raise interest rates until there is a material change in inflation and we don’t see that scenario happen for at least the next couple of years and that is good for gold,” he added.

For traders who want double the exposure to gold prices, there’s the ProShares Ultra Gold (NYSEArca: UGL). UGL seeks a return that is 2x the return of a benchmark (target) for a single day, as measured from one NAV calculation to the next.

Due to the compounding of daily returns, returns over periods other than one day will likely differ in amount and possibly direction from the target return for the same period. These effects may be more pronounced in funds with larger or inverse multiples and in funds with volatile benchmarks. Investors should monitor holdings as frequently as daily.

UGL is ideal for:

For investors needing even more than double exposure, there’s the  Direxion Daily Gold Miners Bull 3X ETF (NYSEArca: NUGT), which makes a play on gold miners. NUGT seek daily investment results, before fees and expenses, of either 300%, or 300% of the inverse (or opposite), of the performance of the NYSE Arca Gold Miners Index.

The index is a modified market capitalization weighted index comprised of publicly traded companies that operate globally in both developed and emerging markets, and are involved primarily in mining for gold and, to a lesser extent, in mining for silver. The Index will limit the weight of companies whose revenues are more significantly exposed to silver mining to less than 20% of the Index at each rebalance date.

NUGT is deal for: