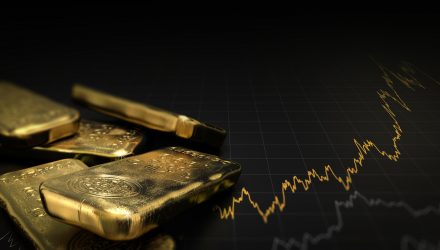 Former Overstock CEO Loads Up on Gold and Bitcoin

You can almost say that former Overstock CEO Patrick Byrne left his company wearing a golden parachute—literally –as he sold stock of the company he launched in 1999 and loaded up on gold as well as its digital currency equivalent Bitcoin.

Per a Washington Post report, Byrne’s “incessant broadcasting of his involvement in a ‘deep state’ investigation had irreparably linked his personal life with the public company. On Overstock letterhead the week before, he claimed that he had romanced a Russian agent at the urging of the ‘Men in Black’ — his term for federal agents — and effectively inserted himself into an international political scandal.”

Byrne wasn’t the only one seeking the safety of assets like gold as August marked a month of heavy volatility in the U.S. equities market. As such, a lot of investors allocated much of their capital into bonds and gold alike.

“I have been following the US economy and the deteriorating world situation, and I am growing worried, as I am sure you have as well,” Byrnes wrote in a blog. “For these reasons it may give you some comfort to know what I am doing with the capital generated by the sale of my stock: after paying tens of millions in taxes (after all, ‘We didn’t build that,’ right?) by Friday the rest will be in investments that are counter-cyclical to the economy: Gold, silver, and two flavors of crypto.

“The gold and silver are stored outside of the United States, in Switzerland, and within two weeks, will be scattered in other locations that are even more outside of the reach of the Deep State, but are places that are safe for me,” added Bryne.

Investors who are not looking for leverage can use non-leveraged funds like the SPDR Gold MiniShares (NYSEArca: GLDM). In addition, investors can also look at SPDR Gold Shares (NYSEArca: GLD) as a means to adding precious metals to a portfolio certainly speaks to the diversification benefits of gold, among other things.