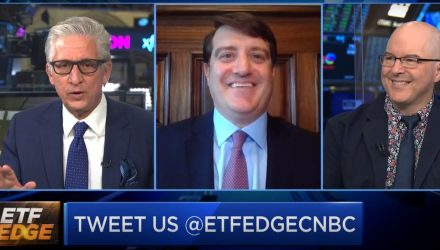 Last week brought about the approval of single stock inverse and leveraged ETFs by the SEC and the subsequent launch of a variety of funds based on some of the more popular stocks such as Nvidia, Tesla, Nike, and more. Dave Nadig, Financial Futurist at VettaFi, along with Greg Bassuk, CEO of AXS Investments, discussed the approval by the SEC and launch of the first eight funds of this type by AXS with CNBC’s Bob Pisani on this week’s “ETF Edge.”

“These ETFs are designed to provide amplified exposure on single stocks, stocks like Tesla, Nvidia, and some of the others that you mentioned. They’re designed for active traders, traders who are making daily decisions based on earnings and other corporate events for which these tactical solutions are important,” Bassuk said.

They are the first in a series of single-stock derivative ETFs coming to market, with AXS planning to roll more out later with different degrees of inverse or leverage positioning and a bevy of other issuers also launching their own takes. This type of fund has been actively trading in European markets successfully for a while, but these funds can be particularly punishing for investors that don’t understand their mechanics and are meant to be used by active day traders only.

“Several folks at the SEC came out basically saying, ‘these products are very sharp tools in the drawer,’ and like all of these leveraged and inverse products, you have to think of these as being razorblades in your toolbox,” Nadig explained.

Are We in Danger of Volmageddon 2.0?

They are funds meant to be used around events that day traders would want to take a particular position around and will be highly volatile as a single-stock position versus a basket of stocks. These types of funds can also drive volatility for the securities they have positions on at the close of each market session as they reset daily. Nadig uses the Tesla bear position as an example.

“Every day when they reset, they would need to reset that exposure; if they were short and Tesla is down, they actually need to lighten up that exposure. They need to be sellers of more exposure while Tesla is going down,” Nadig said. “On the opposite side, if Tesla’s going up, they’re going to have to be net buyers, or in that case unwinding shorts — same thing — that can create that end-of-day increased volatility.”

The concern of impacting the underlying asset is a valid one, but it would take an enormous amount of investment volume to create problems, according to Nadig. Still, many investors remember the explosion around the Vix options and ‘Volmageddon’ that happened four years ago and saw around $2 billion in losses and remain intensely leery of leverage when it comes to a singular stock.

This latest type of complex product approval is part of the continued innovations happening within the ETF space as issuers chase after the whole new retail class of investors that sprang up with the onset of the pandemic in the U.S., but products such as these will have a particular use case that could lead to extravagant losses if mismanaged.