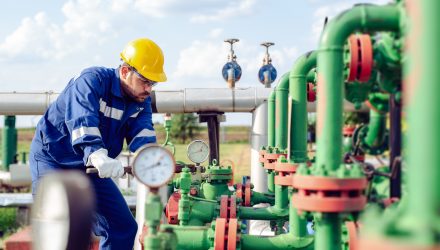 Big Energy ETFs Are in a Precarious Spot

For much of this year, the energy sector has been a solid group, but recently, some of that strength has evaporated. The Energy Select Sector SPDR (NYSEArca: XLE) and rival equity-based energy exchange traded funds (ETFs) are trading lower just as oil and the energy sector are entering their seasonally weak periods.

“The performance of the energy sector has been one of most counter-intuitive outcomes in the stock market this year given the rise in oil prices in 2019,” reports Andrew Addison for Barron’s. “West Texas Crude Oil is up 40% year-to-date, with Brent Crude rising 35%. There has been a pickup in merger activity in the group, with Chevron (CVX) and Occidental Petroleum (OXY) fighting over Anadarko Petroleum (APC). Yet in the face of these seemingly bullish developments, the energy sector’s performance has been abysmal.”

“Abysmal” may be a harsh way of describing the energy sector’s performance this year, but over the past week, XLE is lower by 3.73%, trimming its year-to-date gain to just under 13%.

What’s Next for Energy Fundamentals?

“While one could certainly argue that energy stocks are closer to the end of their Bear cycle than to their beginning, there is no evidence of a bottom forming,” according to Barron’s. “A bottoming process requires that the moving averages stop declining, and that prices gain the support of their moving averages. At best, that is still many months into the future.”