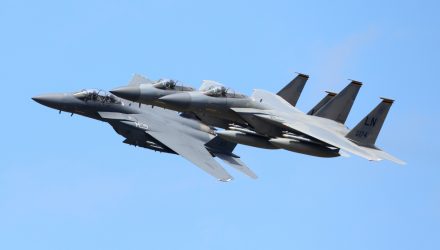 The fund is up 32% behind strong momentum to start the year.

DFEN’s relative strength index (RSI) is registering a reading of 69.34, which is just below overbought levels.

Where Is Aerospace & Defense Headed?

From a fundamental standpoint, more defense spending could give DFEN the necessary tailwinds for more sector strength. Looking at the sector from a domestic standpoint, U.S. President Joe Biden’s administration doesn’t look to be making any defense cuts anytime soon.

Looking at the sector from a global standpoint, spending is also trending higher, which bodes well for DFEN.

“The Global Defense spending has been on a major upswing led by the return to great power competition amongst leading geopolitical powers spearheaded by R&D led technological evolution,” a GlobeNewswire release stated.

“The realignment of U.S. defense spending focus on competing with near peer adversaries and maintaining the traditional overmatch over adversaries has accelerated the pace of replacement of ageing equipment with the award of several new defense contract awards over the recent years & many others in pipeline which remain a key focus area for the industry given their strategic nature, scale as well as scope & long term horizon,” the release added.