You are at:Home»Leveraged & Inverse Channel»COVID Trade: The Race for an Ounce of Prevention 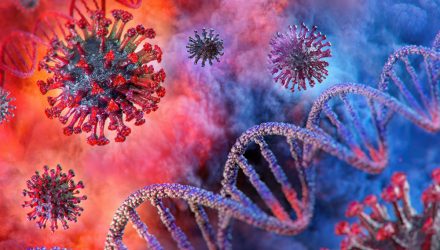 COVID Trade: The Race for an Ounce of Prevention

LABU: Which Biotechs Have Led the Covid Trade?

Summertime is typically regarded as a notoriously choppy month for markets as volume tends to dissipate. But 2020 is obviously a year of altered expectations. While volatility still permeates the broad market, one segment has seen a fairly consistent upward trend through the bulk of the year.

That segment is, of course, biotech, with research labs and pharmaceuticals under close scrutiny from investors eager to capitalize on any headway in the public health battle that is raging in countries across the globe.

The Race for an Ounce of Prevention

From a top-down perspective, the S&P Biotechnology Select Industry Index (SPSIBITR) has climbed about 60% through the first six and half months of the year.

This momentum has helped the Direxion Daily S&P Biotech Bull 3X Shares (LABU), which aims to deliver three times the daily performance of SPSIBITR, rise by 240% in that same span.

For the fund’s standardized and most recent month end performance click here www.direxion.com/etfs

The industry’s strength can be attributed to a mix of the broad market’s strong bounce following the March sell-off, as well as a steady drip-feed of information regarding clinical trials in the race to discover a vaccine for COVID-19. The sum total of this combination for the index and LABU is that both are comfortably at 52-week highs.

One of the unique aspects of this public health crisis is the breadth of efforts to help solve it. While the largest drugmakers in the world—like Merck, Pfizer, Gilead, and Johnson & Johnson—are involved, there are also a number of smaller companies who have risen to the challenge. What follows are details on four companies who have proven to be at the forefront of the market’s understanding of the global pandemic, each of which has helped push LABU to its current high-water mark.

Higher by more than 200% year-to-date (YTD) and surging by 137% in the past three months alone, OPKO Health, Inc. (OPK) has emerged as a new player in the COVID-19 fight, specializing in the testing and diagnostics field.

The company gained much of its recent prominence among investors back in June when a Crain’s New York article revealed OPKO subsidiary BioReference Laboratories entered a $150M deal with the state of New York for COVID-19 antibody tests among state workers. The stock gained further attention in July when it announced it would also be providing testing for NBA players and employees as the league looks to reopen safely for the coming season.

OPKO Health is likely to remain on investors’ radar as the biotech industry prepares to report in coming weeks. OPKO Health is expected to deliver its second-quarter results sometime in early August.

Perhaps the most prominent name in the biotech industry at the moment, Moderna, Inc. (MRNA) has risen to prominence as the frontrunner in the race for a viable COVID-19 vaccine, with its mRNA-1273, its SARS-CoV2 vaccine candidate currently wrapping up phase 2 clinical trials. The stock is up 300% YTD, though its climb has been more measured through the year than some of its contemporaries, gaining about 75% over the past three months.

This consistent momentum can be attributed almost solely to strong clinical data from phase 1 trials, as well as high expectations for phase 3. Endorsements of the trials from analysts and public health experts have only added fuel to the fire, pushing shares of the company to new all-time highs.

Although its COVID-19 candidate will likely remain the main catalyst for the stock for the foreseeable future, the company is also set to report earnings in early August.

Another biotech stock blazing an impressive path in recent months, Inovio Pharmaceuticals (INO) is up on the year by 645% and higher by 230% in the past three months alone. Like Moderna, much of the momentum is thanks to the company’s own INO-4800 COVID-19 vaccine candidate, which has recently entered phase 2 and 3 efficacy trials.

However, the stock also owes a good deal of its recent price action to news of $71M contract with the U.S. Department of Defense. The contract is intended to provide funding for the production of its Cellectra smart delivery devices, which inject the company’s INO-4800 immuno-response drug.

News of the contract drew a great deal of attention to the stock, pushing it to a 20-year high of $31.71 late in June. It has since receded somewhat as the market has processed the news. However, the stock continues to see high relative volume through July, and will likely be on traders’ radar when it reports Q2 earnings in early August.

Finally, the market leader in the biotech industry for 2020, Novavax, Inc. (NVAX) has blazed an impressive trail over the year. The stock opened 2020 at just shy of $4 a share and it currently sits at a per-share value of around $140, a 3,400% increase. The recent trading activity over the past three months has been no less enthusiastic, with the stock posting more than 600% gains since the final days of March.

The stock’s first major price jump of the year came on the heels of a strong first-quarter earnings delivery, reporting nearly double the analyst consensus revenue expectations. In tandem with the report, Novavax also announced a $384M contract with the Coalition for Epidemic Preparedness Innovations, or CEPI, for clinical development of its NVX-CoV2373 COVID-19 candidate. The contract represents the international body’s most substantial single investment to date, according to the organization’s CEO Richard Hatchett.

Given the double punch of strong earnings and the dollar vote of an international epidemiology organization, the stock has charted seemingly exponential growth heading into the dog days of summer. Like the other stock mentioned above, biotech traders will likely have a keen eye trained on Novavax heading into the early-August reporting window.

Hope Under The Microscope

The market and the world at large will likely be subject to the ebb and flow of the ongoing public health crisis for months and perhaps years to come. It’s no wonder why investors are so keen to focus their attention on the world of pharmaceutical research, since it holds the key to regain a semblance of order over a world suddenly thrown into doubt.

Whether or not a vaccine would or even could ever return global markets to the exuberant normalcy the virus displaced it yet to be seen. However, investors are pinning their hopes that this global pandemic is simply a stumbling block rather than a paradigm shift in the world of global commerce.

Short-term performance, in particular, is not a good indication of the fund’s future performance, and an investment should not be made based solely on returns. Because of ongoing market volatility, fund performance may be subject to substantial short-term changes.

Market Disruptions Resulting from COVID-19. The outbreak of COVID-19 has negatively affected the worldwide economy, individual countries, individual companies and the market in general. The future impact of COVID-19 is currently unknown, and it may exacerbate other risks that apply to the Fund.

Direxion Shares Risks: An investment in the ETFs involves risk, including the possible loss of principal. The ETFs are non-diversified and include risks associated with concentration that results from an ETF’s investments in a particular industry or sector which can increase volatility. The use of derivatives such as futures contracts and swaps are subject to market risks that may cause their price to fluctuate over time. The ETFs do not attempt to, and should not be expected to, provide returns which are a multiple of the return of their respective index for periods other than a single day. For other risks including leverage, correlation, daily compounding, market volatility and risks specific to an industry or sector, please read the prospectus.