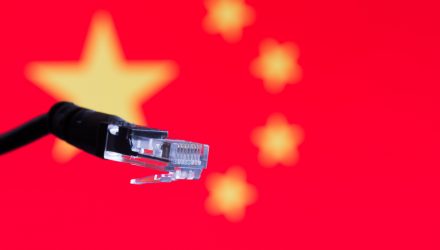 The Direxion Daily CSI China Internet Bull 2X Shares (CWEB) topped $100 recently, cresting 43% past its high set over three years ago. With China surpassing one billion internet users, according to a CNBC article, it’s easy to see why.

“New data show the extent to which Chinese people went online in the wake of the coronavirus pandemic and adopted new habits, such as shopping through video livestreams,” the article explained. “By the end of 2020, China had 989 million internet users, according to figures released Wednesday by government agency China Internet Network Information Center (CNNIC).”

CWEB seeks daily investment results equal to 200% of the daily performance of the CSI Overseas China Internet Index, which is designed to measure the performance of the investable universe of publicly traded China-based companies whose primary business or businesses are in the Internet and Internet-related sectors.

The fund’s been churning out an astounding 74% this year and over 200% within the last 12 months.

A Pandemic Push toward Internet in China

After finding itself in the eye of the Covid-19 storm last year, the number of internet users was up “85.4 million from March, just after the worst of the coronavirus outbreak in China that forced hundreds of millions of Chinese people to spend more time indoors. For a sense of the scale of China’s nearly 1 billion-large internet population, its lead over India’s estimated 639 million internet users is 350 million, which is bigger than the entire U.S. population.”

What’s been driving this rise? With social distancing measures in place, more consumers are turning to the internet for online shopping.

Add to that more discretionary income.

“The report said that between March and the end of the year 72.15 million more people were shopping online, predominantly on mobile phones, reaching 782 million,” the article said. “More people also had more money to spend — and were increasingly working from home.”

This is all well and good for CWEB, which has the potential to keep climbing through 2021 as a global immunization continues to take place. The fund certainly has momentum swinging in its favor as its relative strength index (RSI) is well within the overbought territory at almost 80.