You are at:Home»Leveraged & Inverse Channel»China Rushes to Deploy Robots Amid Coronavirus Outbreak 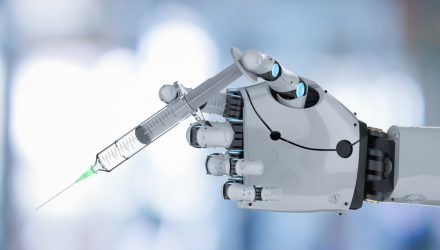 The second largest economy wants nothing more than a return to normalcy following the coronavirus outbreak and as the dust settles amid the chaos, robots are being deployed in China to help with the transition.

“As some 100 million factory workers return to China’s automotive, consumer electronics and smartphone makers, one clear, longer-term impact will be an emphasis on robotics and automation,” noted a CNBC report. “Robotics can reduce labor costs and increase productivity — and prevent a recurrence of future plant shutdowns.”

As disruptive technology like robotics continues to develop, the prevalence of robots is almost certain.

“Over the past several years, the world’s second-largest economy has been undergoing a so-called ‘robotics revolution,’” the report added. “Now, the impetus is greater than ever to embrace automation or be left behind. China has become the world’s largest market for industrial robotics and the fastest-growing market worldwide, surging 21% to $5.4 billion in 2019, while global sales hit $16.5 billion, according to the International Federation of Robotics in Frankfurt.”

A Robotics Trade with 3x Leverage

The robots are coming to a local warehouse near you—at least that’s what industry trends are showing, and it would serve traders best to capitalize on this move to robotics with ETFs like the Robotics & AI Bull 3X ETF (NYSEArca: UBOT).

Traders looking to capitalize on the move to robotics can use UBOT as a tool. UBOT seeks daily investment results equal to 300 percent of the daily performance of the Indxx Global Robotics and Artificial Intelligence Thematic Index, which is designed to provide exposure to exchange-listed companies in developed markets that are expected to benefit from the adoption and utilization of robotics and/or artificial intelligence.

The robotics space is certainly in a push-pull dichotomy of investors capitalizing on the latest in disruptive technology, while at the same time, getting push back from those threatened by the wider adoption of robots. The fears are warranted given that robotics technology has the capacity to supplant human jobs.