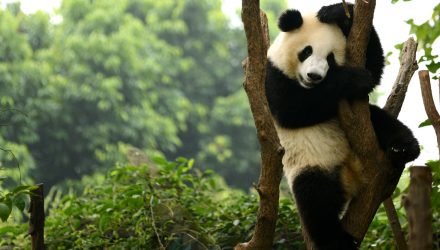 Panda bears might be native to China, but it was exchange-traded fund (ETF) bears dwelling in the Chinese equities space on Tuesday with the Daily FTSE China Bear 3X Shares (NYSEArca: YANG). As the threat of trade wars permeated the capital markets, YANG was up 8.03 percent.

Meanwhile, volatility rained down on U.S. equities and saw the Dow Jones Industrial Average fall as much as 600 points before settling for a 473-point drubbing at the close of Tuesday’s trading session. It was the Dow’s worst loss since January 3 as the wall of worry got taller over U.S.-China trade talks deteriorating.

Of course, YANG traders are rejoicing the latest events. The fund seeks daily investment results equal to 300 percent of the inverse (or opposite) of the daily performance of the FTSE China 50 Index. The index consists of the 50 largest and most liquid public Chinese companies currently trading on the Hong Kong Stock Exchange (“SEHK”).

“The biggest threat to this market is the U.S.-China trade issues,” Ives said. “If China and the U.S. dig in on trade, it’s time to put on the hard hat because the market could go down another 10% plus.”