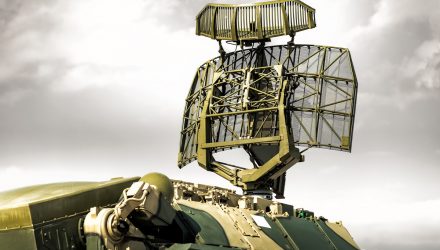 The iShares U.S. Aerospace & Defense ETF (Cboe: ITA), the largest aerospace and defense exchange traded fund (ETF), is up more than 21% year-to-date and that is with some struggles experienced by Boeing Co. (NYSE: BA), ITA’s largest holding, following the grounding of the 737 Max passenger plane.

For bullish traders, the Direxion Daily Aerospace & Defense Bull 3X Shares (NYSEARCA: DFEN) has been producing rapid-fire returns, as it is up more than 70% year-to-date.

Still, Dow component Boeing is up more than 17% year-to-date and some analysts are bullish on the aerospace and defense giant.

“But Wall Street isn’t abandoning Boeing stock in favor of other aerospace firms,” reports Al Root for Barron’s. “More than 65% of analysts covering the company rate the shares a Buy, 10 percentage points better than the average buy rating-ratio for stocks in the Dow Jones Industrial Average.”

Recently, Lockheed Martin (NYSE: LMT), another marquee ITA holding, reported stellar first-quarter results. Lockheed Martin reported that revenue rose 23% in the March quarter as the company executed contracts for F-35 combat jets, munitions and missile-defense systems for the U.S. and international customers, according to the Wall Street Journal. The company has relied heavily on its F-35, missile-defense systems and surging production of munitions to drive growth.

Bolstering the case for ITA and its lineup of aerospace and defense names that are major domestic military contractors is Uncle Sam’s recent proclivity for increased defense spending.

That largess has analysts bullish on Boeing.

“Jefferies analyst Greg Konrad is one of the Boeing bulls. His price target is $448 a share, up 17% from recent levels. What’s more he sees upside to $570 a share representing a nearly 50% gain,” according to Barron’s.