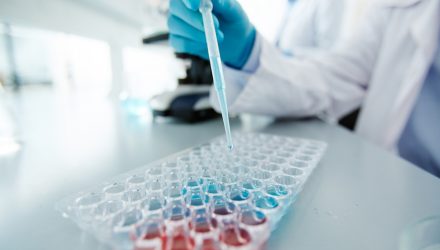 Among the winning exchange traded funds Wednesday were biotechnology funds, including the SPDR S&P Biotech ETF (NYSEArca: XBI), which takes an equal-weight approach to the biotech space. XBI was up nearly 2% in midday trading, indicating it could be bucking an ominous trend set the last times Democrats gained control of the House.

“The SPDR S&P Biotech ETF (XBI) fared the worst after the Democrats took control of the House 12 years ago,” according to Schaeffer’s Investment Research. “The fund was roughly flat the week and month after the election, but eventually slumped to a 9.6% loss through the end of that year. As it stands now, XBI recently broke below support at its year-to-date breakeven level just below $85, and now appears to be fighting resistance at this price point.”

LABU, which takes the 3x or 300% daily performance of the S&P Biotechnology Select Industry Index, is attempting to reverse its October slide this month and is off to a good start this month.