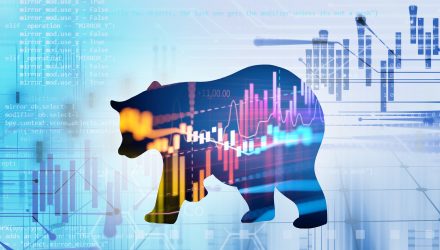 Bearishness Could Take Hold of Markets with Fewer Rate Cuts

If there’s anytime to be a bear, that time could be now as the prospect of fewer rate cuts could mean more market downturns ahead, according to Blackstone chief investment strategist Joseph Zidle.

“The market is demanding upwards of 100 basis points of interest rate cuts on top of what we saw in July,” said Zidle.

Following the latest quarter-point rate cut by the Federal Reserve, the central bank offered no clear direction on whether more cuts could be ahead. Zidle posits that another 25 basis point cut will result in October, “but at that point, my guess is that the Fed is then on hold.”

The cut and hold strategy certainly goes at odds with what the capital markets are expecting—more cuts—especially given the global economic landscape of lower rates.

“The markets are saying to the Fed, ‘Think globally. Rates around the world are so low, you’ve got to cut our rates lower.’ But the Fed is going to have to respond to local data,” Zidle said. “They are going to have to act locally which I think is going to constrain them from giving the market all it wants.”

“The markets are set up for a disappointment. They’re going to have to re-rate their expectations,” he added.

While the U.S. has long been the leader in an interest rate policy game of “follow the leader,” that could be changing, especially given the fundamentals in today’s market.

“You’ve got a market that this year has traded off of hopes for coordinated global central bank easing,” he said. “That’s the only reason why we’re up 20% year to date. We’re certainly not there because of fundamentals.”

Zidle pointed out that the extended bull run seen the past decade was certainly a setup for future market downturns that could range between 10 to 20%.

“Any bull market can produce 10-20% pullbacks. We saw that in the fourth quarter of last year,” Zidle said. “I wouldn’t rule out something that’s on the order of 10-20%.”

This outlook could put a bearish spin on major indexes like the S&P 500. As such, traders can look to the Direxion Daily S&P 500 Bear 3X ETF (NYSEArca: SPXS) for a leveraged inverse play.