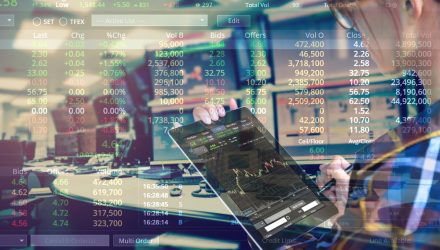 Chinese technology companies looking to expand their operations overseas could push the Direxion Daily CSI China Internet Bull 2X Shares (CWEB) higher after being caught in a downdraft early in the year.

Stricter government regulations are forcing technology companies to look outside the country for opportunities. This global expansion comes as companies are still early in their business life cycle, but the Chinese government is allowing them to grow and expand at a faster pace.

“Our view was that Chinese business models are global best practices, especially for emerging markets, because the way that Chinese consumers have evolved with technology is much more reminiscent of the way the next wave of consumers in India and Pakistan and Egypt and in Nigeria, and Brazil, will engage with technology,” Harburg added.

A mass of inflows have been heading into CWEB, as evidenced by the spike in volume during the first week of December. China has been cracking down on large internet companies like Baidu and Tencent Holdings in early 2021 to curb monopolistic business practices, but that may be winding down.

The Evergrande Crisis may have also taken away the focus off China’s big tech, and investors could be heading back into technology once again. CWEB has stabilized and started trading more sideways since August, giving traders an opportunity to strike at an ideal entry point in an area of value.

“Chinese technology companies are considering expanding overseas much earlier in their lifecycles, a venture capitalist told CNBC — marking a shift in attitude among firms in the world’s second-largest economy,” CNBC reports. “That shift has been prompted in part by China’s tighter regulatory scrutiny on technology as well competitive pressure in certain sectors, according to Ben Harburg, managing partner at venture capital firm MSA Capital.”