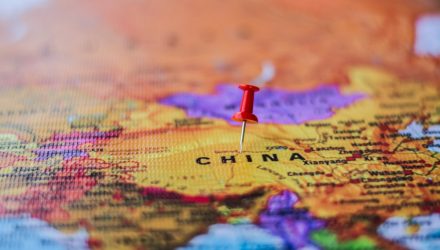 China’s retail sales picked up during the month of October, which could provide an early indicator that the economy could be overcoming its challenges in 2021.

As such, ETF traders can look at potential buy-the-dip opportunities in China funds. A pair of leveraged funds from Direxion could also help amplify gains.

One way to play a bounce back is via the country’s internet sector with the Direxion Daily CSI China Internet Bull 2X Shares (CWEB). With the country’s recent moves to contain monopolistic business practices, particularly when it comes to big technology firms like Alibaba and Tencent holdings, CWEB has been trending on the downside for much of the year

However, what goes down must eventually come up, especially after CWEB’s strong year in 2020. The fund gained over 100% amid a heavier reliance on the internet as COVID-19 forced strict social distancing measures.

Chinese Economy Not to Be Denied by Evergrande Crisis

In addition to the Chinese government’s wrangling of big tech firms, its 2021 was also marred by the country’s largest property developer Evergrande hovering on the brink of default. The crisis was eventually averted after some swift capital raising, but it did no favors for Chinese equities.

“The world’s most indebted real estate developer China Evergrande Group has managed to avert default again and again, ever since the news about its liquidity crunch emerged. The fact that the Chinese real estate giant’s capital pipeline is not that strained as anticipated has even triggered speculation as to how Evergrande has been able to find the money it needed,” a Global Times article notes.

“But one thing is for sure: the Chinese economy won’t be dragged down by the trouble in its real estate sector, which is definitely not like the kind of crisis portrayed by Western media outlets,” the article says further.

A bounce-back play could be a more broad selection in the Direxion Daily FTSE China Bull 3X ETF (YINN). The fund seeks results that equal 300% of the daily performance of the FTSE China 50 Index, which consists of the 50 largest and most liquid public Chinese companies currently trading on the Stock Exchange of Hong Kong.