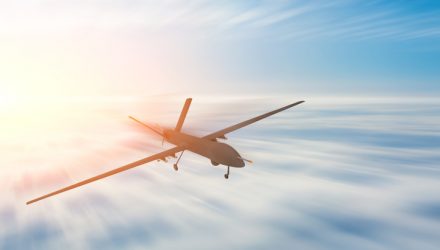 As Middle East Tensions flare up with the threat of heightened military action, the aerospace and defense sector and related exchange traded funds could outperform the broader market.

Defense companies have historically outperform the broader market over the six months following a crisis event in the Middle East, CNBC reports.

According to CNBC Kensho data going back to the start of the 1990 Gulf War, defense stocks generated double the return of the S&P 500 over the six months after a crisis event in the Middle East. Specifically, the defense sector averaged a 6.7% return after 19 Middle East crisis events over the past three decades, compared to the average 3.3% return for the S&P 500.

Some analysts like Citi’s Jonathan Raviv warned that after the airstrike, the heightened tensions with Iran did not necessarily translate to an increase in the U.S. defense budget. President Donald Trump has already signed a $738 billion National Defense Authorization Act last month, or $21 billion bigger than the previous year’s bill.

“Heightened risk perceptions tend to support defense multiples across the board,” Raviv said in a note.

Bernstein analysts also added that the budget could expand indirectly through supplements such as overseas contingency operations funding, or a war budget. Company stocks with exposure to other governments in high-threat regions could further enjoy a boost in demand from those governments raising defense spending as well.

“We have found that once checkbooks are opened, everyone reaches for the money – whether it is from parts of the DoD or from members of Congress seeking funds for their districts,” Bernstein said in a note.