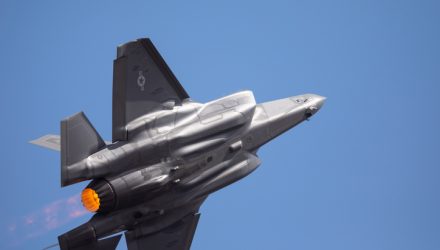 Boeing Co. took a $4.9 billion charge on its 737 Max jets, which was considered a “positive” and met Morgan Stanley analyst Rajeev Lalwani’s expectations, Bloomberg reports. Lalwani was optimistic about the tentative promise of the jetliners’ return ahead of some investors estimates, alongiwht the 2020 production goals.

Looking ahead, Lalwani projects “a re-start of the upward narrative” for Boeing.

The airline manufacturer’s shares jumped 4.3% on the outcome. BA makes up 22.4% of ITA’s underlying holding.

Nevertheless, some offered a more cautious tone. Citi analyst Jonathan Raviv warned that “accounting assumptions shed some light, but it ain’t over.” Raviv believed the charge could come with a neutral to positive outcome but added that it didn’t reflect what steps the Federal Aviation Administration may take.

Boeing said it would take an after-tax charge of $4.9 billion in connection with the concessions and other consideration it will pay to customers due to the recent airplane grounding. There are 387 MAX planes grounded and more that have not been delivered, Barron’s reports. The latest charge is seen as a sign of confidence that the company is moving past the troubles and the jet will soon return to service.

The 737 Max, Boeing’s newest single-aisle plane, has been grounded world-wide since mid-March after two tragic crashes that killed all on board. Boeing has pinpointed the cause to flight-control software in both crashes.

“For purposes of the second-quarter financial results, the company has assumed that regulatory approval of 737 MAX return to service in the U.S. and other jurisdictions begins early in the fourth quarter 2019,” reads the company’s news release.