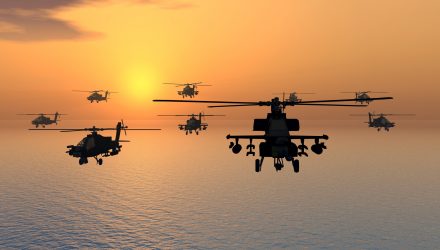 It’s been 16 months since the inception of the Direxion Daily Aerospace & Defense Bull 3X Shares (DFEN). Last summer’s war of words between President Trump and Kim Jong-Il is part of the reason why the fund is up over 100% since that time.

But even with those tensions in the rearview mirror—at least for now— the sector has still outperformed. The Dow Jones U.S. Select Aerospace & Defense Index (which DFEN tracks) is up nearly 10% year-to-date, compared to the S&P 500’s 8 percent gain. This comes even as some of DFEN’s largest holdings have been range-bound for most of the summer. 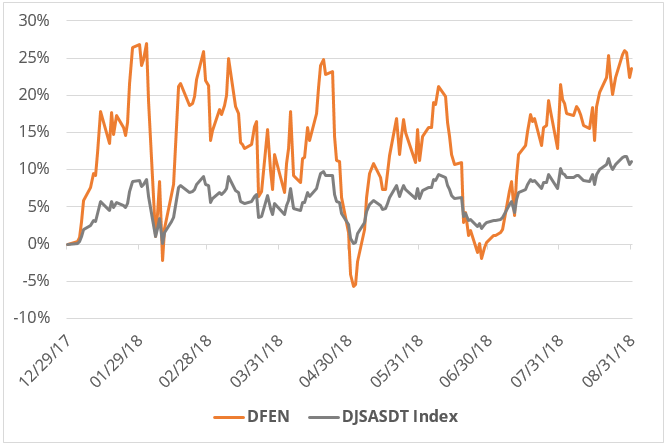 Data Range: 1/1/2018 – 8/31/2018. Source: Bloomberg. The performance data quoted represents past performance. Past performance does not guarantee future results. The investment return and principal value of an investment will fluctuate. An investor’s shares, when redeemed, may be worth more or less than their original cost; current performance may be lower or higher than the performance quoted. For standardized performance and the most recent month-end performance, click here.

Others top holdings, like Northrop Grumman and General Dynamics, are down 7% and 1% respectively from the May lows. Those two combined represent nearly 11% of DFEN.

The one exception of the fund’s top holdings appears to be United Technologies, which makes up 8.11% of DFEN and is up 14% since bottoming out on May 3.

Looking ahead however, the sector is likely to have an upcoming catalyst in the form of the midterm congressional elections. Chris Higgins, senior equity analyst for Morningstar, recently said in a note that he expects the defense sector to continue to outperform in the long-term despite the midterms causing some potential volatility.