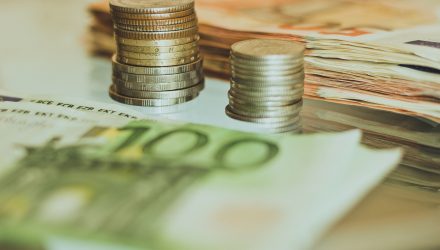 The euro currency and related exchange traded fund has been beaten down as the U.S. dollar strengthened and the pommeling doesn’t seem like it will be ending any time soon.

The Invesco CurrencyShares Euro Currency Trust (NYSEArca: FXE) declined 3.1% year-to-date and plunged 9.3% over the past year, with the euro now trading at $1.115. The EUR is head for its fifth weekly decline in sex weeks.

The euro is currently trading at around a two-year low against the U.S. dollar after confidence among German businesses and French manufacturers fell in April, the Wall Street Journal reports.

Looking ahead, new data may continue to drag on the Eurozone currency. For instance, the Commerce Department recently revealed a strong first quarter U.S. economic expansion, which should help reassure investors about the growth trajectory in the U.S. and further help prop up demand for greenbacks.

On the other hand, expectations are more lowered for next week’s batch of European data, which includes estimates for French gross domestic product, U.K.’s manufacturing data and French and German manufacturing data. The widening disparity between Eurozone and U.S. economic growth could continue to fuel the bearish bets on the euro currency.

“I think the dollar may even break out of [its]range and head higher now,” Mark Grant, managing director and chief global strategist at B. Riley FBR, told the WSJ, citing the relative strength of the U.S. economy compared with the European economy.

Additionally, some warn that political risks like the prolonged Brexit and the coming European Union elections could further add to uncertainty over the euro. Grant warned that the possibility of a “major power shift” in the EU could send the dollar higher or drag on the euro.