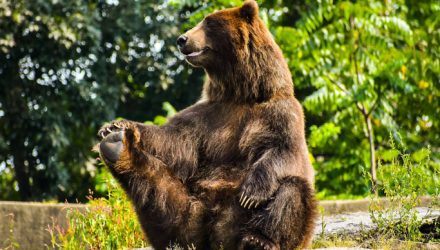 The third quarter corporate earnings season is looking gloomy and could test a market that has already been rocked by weak economic data and ongoing trade risks. Alternatively, investors can tap into inverse or short exchange traded fund strategies to hedge against further pullbacks.

According to FactSet, a number of companies, such as Wynn Resorts Ltd., Macy’s Inc. and Tyson Foods Inc., are already trying to temper investors’ expectations ahead of the coming earnings season, warning that Q3 results could be lower than analysts had expected, the Wall Street Journal reports.

Analysts project S&P 500 company earnings to fall about 4% for the third quarter, according to FactSet data. If the 4% decline remains true, it would mark the biggest year-over-year drop since 2016. Wall Street analysts have been cutting back earnings expectations for all 11 sectors in the S&P 500 in recent months as well.

“If I had to tattoo something on my arm, it would be ‘stocks chase earnings,’” Mike Bailey, director of research at FBB Capital Partners, told the WSJ. “We’re a little more cautious than we were even a couple weeks ago.”

The weak quarterly earnings could throw a wrench into an already fragile market that has been racked by week economic data. For instance, domestic factory activity hit a 10-year low in September, while the services sector grew at its weakest pace in three years. The Friday jobs report, though, eased some of those fears after the government revealed the U.S. labor market is relatively strong, with unemployment at a 50-year low.

Additionally, global factors are also weighing on the U.S. corporate outlook. The U.S. dollar has strengthened this year, pressuring large companies with an international footprint. The prolonged trade war between the U.S. and China has also impeded a number of sectors and dented sentiment.

“The environment with the trade war has become much, much less certain,” Chris Dillon, a capital markets investment specialist at T. Rowe Price’s multi-asset division, told the WSJ. “That easy lift of getting 19% annualized from the S&P 500 is gone.”

As we head to an uncertain earnings season, traders who are looking to protect their portfolios from potential pullbacks in a near perfectly priced market may consider some exposure to bearish or inverse ETFs to hedge against further falls.