You are at:Home»Featured»Latin America ETFs Are Enjoying a Rare Moment in the Limelight 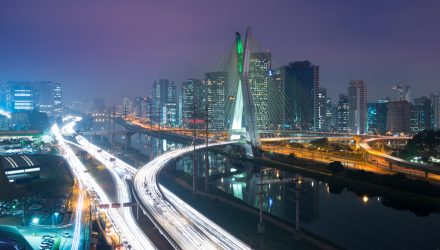 Latin America ETFs Are Enjoying a Rare Moment in the Limelight

In comparison, from the peak of early 2008 to the trough at the start of the pandemic, the MSCI regional benchmark index declined 73% in dollar terms, Bloomberg reports.

Consequently, the MSCI regional benchmark index, known as MXLA, has surged 26% over the first quarter to its best start of a year since the early 1990s. In comparison, U.S. markets are down 4.9%, Western European markets are 6.6% lower, and the broader emerging markets fell 7.4%.

Brazilian assets have been leading the charge. Brazil, the biggest market in the region, has attracted 90 billion reais, or $19 billion, in foreign investors to its stocks over the first three months. Looking ahead, the benchmark Ibovespa equity index is projected to add another 8% by year-end to 130,000, according to the median estimate of a Bloomberg survey of 13 professionals.

However, investors are beginning to look at potential commodity risks after the stellar rally that pushed up resource-related sectors.

“We don’t want to overstay our long position in commodity-producing stocks” in Brazil, Morgan Stanley strategist Guilherme Paiva said in a report earlier this month, adding that risky assets should benefit from a “relatively orthodox macroeconomic policy plan” and the start of a monetary easing cycle after the election later this year.

“The near term outlook is fairly binary” for the region, Malcolm Dorson, a portfolio manager at Mirae Asset Global Investments, told Bloomberg.

“If commodity prices hold up, Latin American equity markets should continue to receive support from earnings growth, currency strength, and flows,” Dorson added. “If we see a significant reduction in geopolitical tension,” then the more liquid, large-cap names may reverse some of the recent strength.