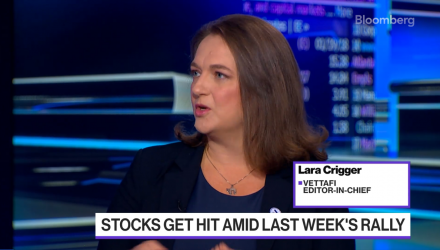 “Now that rates are back on the rise, fixed income is actually providing income again, and so folks are looking to build out their fixed income portfolios,” Crigger said, noting that the income story tends to be prevalent in equities as well, pointing to rising interest in the JPMorgan Equity Premium Income ETF (JEPI), which has impressive yields of 12%.

With Charles Schwab getting into the blockchain/cryptocurrency ETF space, Greifeld observed that many of these funds have similar compositions. Crigger pointed out that the crypto space is one area where effective active managers can really prove their worth, noting that some funds have performed better than others amid the crypto winter. Though the Amplify Transformational Data Sharing ETF (BLOK) is down on the year, it is less down than the rest of the space.

“I think this is actually the time to get into clean energy. We’ve seen a big resurgence in performance a month ago,” Crigger observed, pointing to growing interest in research on the VettaFi platform, particularly among ETFs like the iShares Global Clean Energy ETF (ICLN) and the Invesco Solar ETF (TAN).

Talking about the second half of the year, Crigger predicted that it will look different than the first half of the year but that some threads will persist, particularly interest in fixed income. “I really do believe that we’re going to see people build out those fixed income portfolios because it had been so off for months and months before. Now, it’s starting to finally look like fixed income has attractive qualities again.”