You are at:Home»Featured»Labor Force Sickness 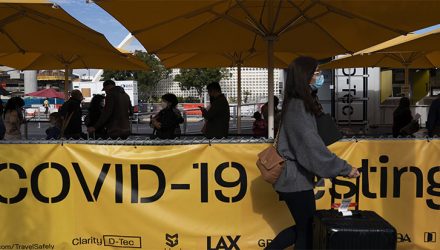 For almost two years after COVID’s emergence, the Federal Reserve pumped money into the economy every way it could. Jerome Powell and his crew kept the pace even as the economy improved a lot.

Why? Powell, among others, was more worried about employment than inflation. He could see how many workers had dropped out of the labor force, and thought the Fed should help entice them back.

Labor force participation is clearly down, but there’s another problem. Even the people who have jobs get sick sometimes.

Sick people tend to miss a lot of work… which adds up.

Since March 2020, the US has had about 52 million lab-confirmed COVID-19 cases, and no doubt many more who never showed symptoms and/or weren’t tested.

Most of the 52 million were at least mildly sick for a few days. It’s fair to assume they missed some work, if they had jobs at the time.

“As I write this, roughly 95,000 people are testing positive for COVID every day in the U.S. Suppose 50,000 of these are employed individuals (the current employment-to-population ratio is 59 percent), and that on average each person who tests positive misses, conservatively, three days of work.

“Add in other employees who must quarantine because they have had close contact with a positive case or who miss work to care for a sick relative, and it seems likely that at least 300,000 to 500,000 employees are absent from work every day as the direct result of COVID infections. That is 0.2 to 0.3 percent of all employees.

“But the effect is much worse than a simple 0.3 percent decline in employment, because it comes with uncertainty; these 300,000 to 500,000 daily absences are unplanned, so employers need to spend money to overstaff or otherwise prepare for worker absences.”

Keep in mind, we’re talking here about people who are still in the labor force. This is on top of the early retirees, career switchers, etc. These are nominally “employed” people who, for a short time, really aren’t.

The numbers are enough to matter, particularly since they aren’t randomly distributed. COVID cases tend to concentrate in certain regions and industries. So if the national average is 0.3%, it’s probably close to zero in some places and much higher in others. And it’s on top of all the other non-COVID absenteeism.

The numbers also change as COVID cases rise and fall. Right now the national daily average is around 125,000, and seems likely to rise this winter as the Omicron variant spreads. Maybe those cases will be less severe, but many workers will still have to stay home for at least a few days.

So imagine you’re an employer. Maybe you own a chain store—20 locations with five workers in each one. If, on any given day, one or two of your 100 workers are out with COVID, what does that mean?

Well, it means the other workers in those locations have to work more, which probably doesn’t make them happy—particularly if their pay stays the same. But raising their pay may not be an option, either. So this hurts retention, creating another headache.

Or you could staff up, adding more workers to cover shortages. But that costs money, too.

Stories like this are happening all over the US. They’re not “crisis” stories so the media pays little attention. Nevertheless, they’re causing real damage to businesses and the economy.

We usually associate “supply chain” problems with ships and trucks. Those are links in the supply chain, but the chain doesn’t end there. It also includes…

Hiring people for these roles is already a problem. Having some percentage of them unpredictably unavailable because they caught or were exposed to COVID is another complication.

Which, as we’ve seen, is easier said than done.

See you at the top,

P.S. Mauldin Economics’ most elite service—The Alpha Society—has opened for a limited time. If you choose to accept this invitation to join, you will receive full credit for any of your active subscriptions towards your membership cost, dollar for dollar. To find out how to access our most comprehensive suite of investing ideas—at the lowest possible price—please take a look at this time-sensitive invitation.