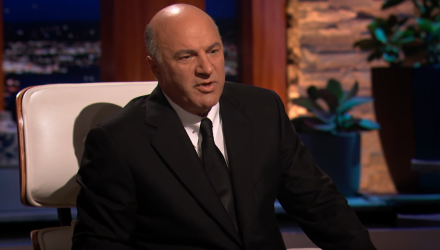 On a recent episode of “Shark Tank,” Canadian businessman Kevin O’Leary agreed to put up $100,000 for a 50% stake in a cryptocurrency app that turns pocket change into cryptocurrency.

Dmitri Love, the creator of the Bundil app, was sidelined with a knee injury he sustained playing soccer and taught himself programming code during his recovery. The Bundil app provides a platform for users to automatically invest spare change from credit or debit card purchases into cryptocurrency, such as Bitcoin, Ethereum, LiteCoin, and BitcoinCash.

“I’m a web developer myself, and I wanted to invest in cryptocurrency, and my family also wanted to invest,” Love explained to the panel of sharks. “So they came to me and were like, ‘Dmitri, how do we buy this? What do we do?’ So I thought, ‘Man, you know, anyone that’s trying to invest in cryptocurrency has to go through all these steps to try to figure out how to buy it. And I thought there could be an easier way for it to be done.”

Love was initially seeking $100,000 for a 10% stake, but eventually submitted to O’Leary’s 50% ownership proposal. O’Leary cited that 80% of micro-investment companies fail within three years, but currently owns a similar business that operates within this space.

The Dow Jones Industrial Average is in the midst of giving investors another roller coaster ride of volatility on Tuesday, falling over 400 points as of 12:30 p.m. ET. Bitcoin in the meantime has been exhibiting stability as of late with its price little changed in the last 24 hours, falling just a scant 0.26% to just under $6,500, and based on the 20-day historical volatility metric, the leading digital currency is right there with some of the top tech names, such as Amazon, Apple and Netflix.