You are at:Home»Video»Kevin O’Leary: How to Teach Kids About Investing 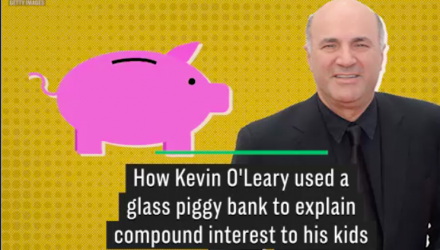 Kevin O’Leary: How to Teach Kids About Investing

In a recent CNBC video (see below), O’Leary explained that the key to children and money was explaining what it is to them very early in life.

“Money is not free, it doesn’t grow on trees, and the concept of working for it is very important,” O’Leary said. “You spend your time to make money. The concept of investing and sleeping and watching money grow is something I introduced to my kinds when they were 5 and 6 years old.”

He said he taught his children about how to put money into an account.

“Now I have to be honest… it was a glass piggy bank,” O’Leary said. “But then I put a few pennies in it while they were sleeping and the idea was that they’d wake up and see there was more there. That was for them to understand the concept of compounded interest. Now, the trouble with that is that I had to keep putting money into that little glass piggy bank for quite a while. But they got it and they understood it really early on. And now they’re pretty good investors. They understand the idea that money makes money.”