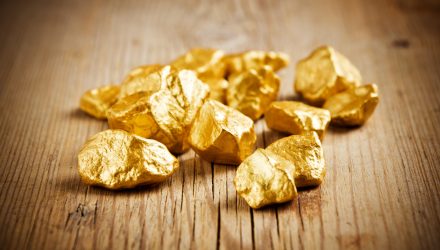 Stock fundamentals like cost deflation across the mining industry, share valuations below long-term average and rising M&A are all supportive of the miners space as well, but those fundamentals could be glossed over if the dollar strengthens. Importantly, many currency traders expect the dollar to remain lethargic this year.

“The juniors have trended lower since February 2017 but are now threatening to break trendline resistance. Since December 2017 the juniors have traded in an increasingly tighter and tighter range which indicates a break is coming very soon,” reports ETF Daily News. “Also, note how the 200-day moving averages are flat and no longer sloping lower. That reflects a mature correction and the potential for a new uptrend if the juniors break above resistance in a strong fashion.”

The $4.5 billion GDXJ holds 74 stocks and has $4.5 billion in assets under management. GDXJ tracks the Global Junior Gold Miners Index, “which is intended to track the overall performance of small-capitalization companies that are involved primarily in the mining for gold and/or silver,” according to VanEck. The weighted average market value of the fund’s holdings is $1.8 billion.

“As we alluded to, GDXJ has strongly outperformed Gold over the past seven trading days. The GDXJ to Gold ratio has reached its highest mark since the start of February. That sudden relative strength is significant considering Gold is within spitting distance of a major breakout,” according to ETF Daily News. “Second, one custom breadth indicator we track is the percentage of juniors (a basket of 50 stocks) trading above the 200-day moving average. This figure (currently 42%) has not exceeded 51% since February 2017. A strong push above 51% could confirm a renewed uptrend in the juniors.”