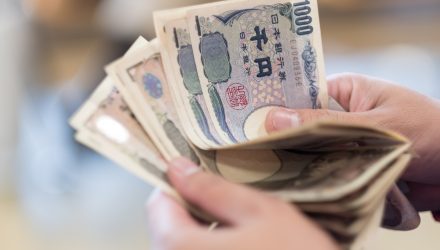 Over the past month, the Invesco CurrencyShares Japanese Yen Trust (NYSEArca: FXY) increased 3.4% as the Japanese yen currency appreciated to JPY109.13 against the USD.

Fueling the strength in the Japanese currency, demand for Japanese government bonds has increased with yields on benchmark 10-year debt turning negative for the first time since September 2017 on the final trading day of 2018, the Wall Street Journal reported.

The negative yield in Japanese debt reflects the heightened flight to safety as global investors are willing to park their cash in the relative safety of Japanese government bonds and also receive less at the end of the decade than they started with.