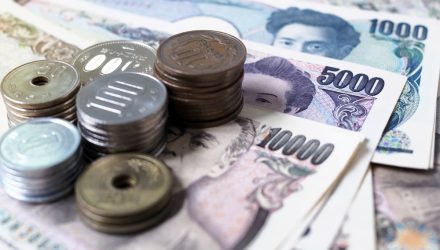 A Japanese currency-related exchange traded fund plunged on Tuesday, with the yen touching a 20-year low against the U.S. dollar, on diverging monetary policy outlook between Japan and the U.S.

The CurrencyShares Japanese Yen Trust (NYSEArca: FXY) fell 1.5% on Tuesday and has declined 9.4% year-to-date. Meanwhile, the Japanese yen now trades at around 128.91 to the U.S. dollar.

On the other hand, the ProShares UltraShort Yen (NYSEArca: YCS), which tries to reflect the daily -2x or -200% daily return of the USD/JPY currency pair, jumped 3.1% on Tuesday and has gained 21.5% so far this year.

The greenback has appreciated to its highest level against the yen since May 2002, Bloomberg reports. The dollar is also on pace for its largest monthly percentage rise since 2016.

Fueling the weakness in the yen against the USD, the Federal Reserve has signaled a hawkish monetary policy stance with multiple interest rate hikes to clamp down on surging inflation, which is at a four-decade high. Meanwhile, the Bank of Japan is keen on maintaining ultra-low interest rates.

“The BOJ has done the opposite of normalization. They have dug their heels in,” Richard Benson, co-chief investment officer at Millennium Global Investments, told Bloomberg.

While Benson warned that Japanese monetary authorities could actually intervene to prop up the yen currency, authorities have not stipulated any specific level.

“I wouldn’t be surprised if the BOJ intervenes because they have a lot of dollars and they can just sell them easily,” Benson added. “There are obvious numbers to talk about and levels, but the narrative is very much about speed as opposed to level. So slow and gradual is fine.”

Japanese Finance Minister Shunichi Suzuki has previously made explicit warnings against the yen’s recent plunge, arguing that the damage to the domestic economy from a depreciating currency is greater than the benefits from it. Japan’s economy is heavily reliant on foreign exports, which are more competitive with a cheaper yen. However, the rising import costs could weigh on domestic demand.

Morgan Stanley, though, argued that the yen’s decline against the greenback was justified with Japan’s worsening terms of trade as surging raw materials prices raise import costs, along with contrasting inflation outlooks between the two developed countries.

Japan’s core consumer price index (CPI) data is expected to rise 0.8% in March year-over-year after a 0.6% gain in February, which is still way below the BOJ’s inflation target of 2%.