You are at:Home»Equity ETFs»Japan ETFs Strengthen as BOJ Reins in Loose Monetary Policy 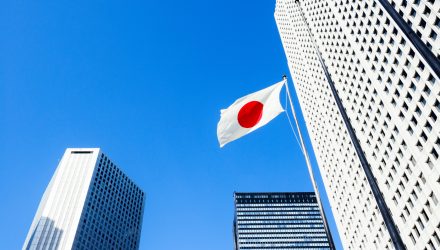 Japan ETFs strengthened Monday, with a financial sector-specific play leading the charge, after the Bank of Japan signaled it was looking to ease back on its aggressively accommodative monetary policy.

The WisdomTree Japan Hedged Financials Fund (NYSEArca: DXJF), which tracks the Japanese financial sector and hedges against a depreciating yen currency, jumped 3.3% Monday and was testing its short-term resistance at the 50-day simple moving average. Meanwhile, the iShares MSCI Japan ETF (NYSEArca: EWJ), the largest Japan-related ETF on the market, was 0.5% higher.

There was rising speculation that the BOJ was debating moves to scale back its massive monetary stimulus policy, Reuters reports. Officials were holding preliminary discussions on possible changes, which include adjustments to interest rate targets and stock-buying techniques, along with ways to make its stimulus program more sustainable.

The report of the BOJ’s deliberations raised expectations the central bank would end some of its accommodative monetary policy, lifting the benchmark 10-year yield as much as six basis points to 0.090%, a level not seen since early February.

“Whatever explanation the BOJ makes, if it makes policy adjustments that will lead to higher rates, that will make market players aware that the BOJ is in the phase of withdrawal from its massive stimulus,” Takafumi Yamawaki, head of currency and fixed income research at J.P. Morgan Securities, told Reuters.