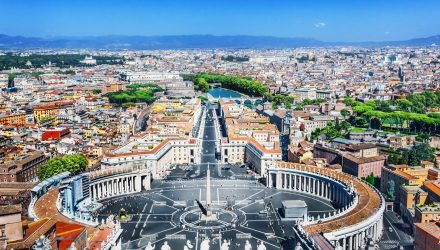 The iShares MSCI Italy Capped ETF (NYSEArca: EWI) is up more than 27% year-to-date, making it one of the best-performing single-country exchange traded funds tracking a developed market, but new economic data could present a challenge for the already tenuous recovery in the Eurozone’s third-largest economy.

With the holiday shopping season here, consumer data was expected to be helpful to Italy’s economic recovery, but recent data suggest should investors should keep an eye on the Italian consumer.

“The household sentiment dropped to 114.3 from a revised 116.0 in October, statistics agency Istat said Monday in Rome. The median estimate in a Bloomberg survey of 12 analysts called for a November reading of 116.5,” according to Bloomberg.

Italy is still struggling with issues within its banking sector, an important consideration with EWI because financial services is the largest sector allocation in the largest Italy exchange traded fund. The Italian government has been under pressure to calm concerns over its ailing banking system, which underperformed in the European Central Bank’s 2014 financial stress test and is holding €360 billion, or $410.5 billion, in bad loans.

“The Italian economy has expanded for 13 straight quarters, rebounding from the longest recession since the World War II. Still the European Commission predicts Italy will have the lowest economic growth rate in the 19-nation euro through 2019. The country’s unemployment rate was unchanged in September at 11.1 percent with youth joblessness at 35.7 percent,” reports Bloomberg.