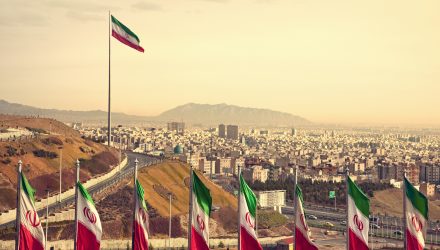 Iran Protests Could be Bullish for Oil ETFs

The United States Oil Fund (NYSEArca: USO), which tracks West Texas Intermediate crude oil futures, ended 2017 with an epic fourth-quarter gain and that bullishness is trickling into 2018 amid new geopolitical tensions. USO is up 5.5% over the past week while the United States Brent Oil Fund (NYSEArca: BNO), which tracks Brent crude oil futures, is higher by nearly 9% over the same period.

“The protests in Iran were the main driver of the bullish sentiment in the oil market. Anti-government demonstrations swept across the country in recent days, and unlike the widespread protests in 2009, the current rallies are related to economic woes and are also taking place in more cities than just Tehran,” reports OilPrice.com.

“At least 14 people have been killed in the protests and an estimated 450 have been arrested. It is the most serious challenge to the Iranian government in years, and Iran’s Supreme Leader put the blame on foreign agents, presumably the United States,” according to OilPrice.com.