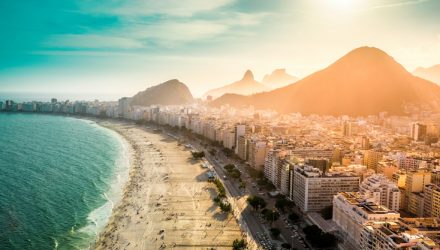 Even amid another bout of political uncertainty, the iShares MSCI Brazil Capped ETF (NYSEArca: EWZ) is up nearly 17% year-to-date and is seen surging off its second-quarter lows. In the second quarter, EWZ slumped as another political scandal rocked Latin America’s largest economy. Brazil’s latest brush with political volatility involves a corruption scandal surrounding President Michel Temer.

“Valuations began to deflate after the global financial crisis, but really took a hit during the Brazilian recession. A data set from Siblis Research shows that the cap/GDP of Brazil ratio fell as low as 33% during the market bottom in 2016, and after a partial recovery currently still rests at under 45%,” according to a Seeking Alpha analysis of Brazil and EWZ.

Stocks in Brazil are inexpensive based CAPE, price-to-earnings and price-to-book ratios. Importantly, Brazil’s credit rating is not in danger, at least not in the near-term, of being downgraded.