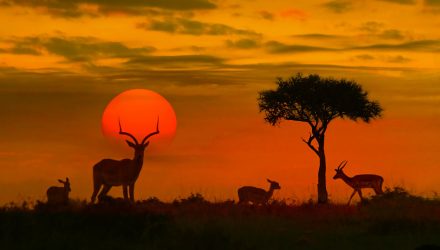 The widely followed MSCI Emerging Markets Index is up more than 29% year-to-date and plenty of single-country emerging markets ETFs are performing as well if not better than the developing world benchmark.

There are some notable exceptions to that trend. The iShares MSCI South Africa ETF (NYSEArca: EZA), the largest ETF dedicated to stocks in Africa’s second-largest economy, is up less than 11% this year and has recently been giving back plenty of gains. Over the past month, EZA is lower by more than 6%. Foreign investors have been departing South African stocks even as broader emerging markets benchmarks surge.

“With almost a full quarter to go, outflows from South Africa’s stock exchange have already reached 90.5 billion rand ($6.6 billion) this year, on track to equal last year’s record 125.8 billion rand. By comparison, net sales reached 56.6 billion rand in 2008, when emerging-market assets bore the brunt of a selloff sparked by the global financial crisis,” according to Bloomberg.

Related: A Cloudy Outlook for the South Africa ETF