You are at:Home»Equity ETFs»Investors Flocked to Healthcare ETFs in July 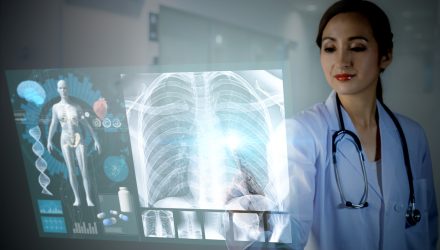 With the healthcare sector recently outperforming technology, investors have been embracing healthcare exchange traded funds. That was the case in July as some benchmark healthcare ETFs saw significant inflows.

The Health Care Select Sector SPDR (NYSEArca: XLV) is the largest healthcare ETF by assets. XLV allocates about two-thirds of its combined weight to pharmaceuticals and biotechnology stocks. There are other catalysts to consider, including that the U.S. economy is moving into the late-cycle phase, overall growth may slow and signs of an economic slowdown could pop up. Consequently, investors may also turn to defensive sectors that are less economically sensitive, such as health care.

“The three largest exchange-traded funds tracking the industry took in more than $1 billion last month. The Health Care Select Sector SPDR Fund, or XLV, accumulated $942 million of inflows in July, the most since February 2017, following three straight months of outflows,” according to Bloomberg.

IXJ does lack a couple of prominent themes from the world of ETFs. First, although it is a global fund, it is not a currency hedged ETF. In IXJ’s case that is just fine because health care stocks are strong dollar beneficiaries and the U.S. is a massive percentage of IXJ’s weight. Second, because it does include exposure to other countries, IXJ’s biotechnology weight is low compared to U.S.-focused health care ETFs for the simple reason that most of the world’s marquee biotech companies are based here.