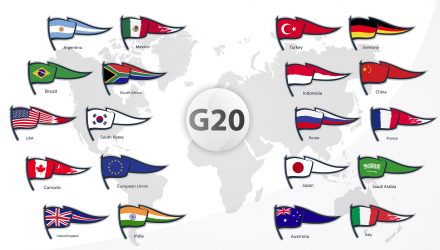 The U.S. markets were in a state of wait-and-see as the G-20 Summit meeting in Buenos Aires was underway with investors fixated on a meeting between U.S. President Donald Trump and China president Xi Jinping.

The major indexes were almost catatonic as the Dow Jones Industrial Average gained 15 points, while the Nasdaq Composite rose over 30 points and the S&P 500 ticked about 10 points higher.

This weekend will be of particular importance as Trump and Xi are slated to have dinner and discuss their trade differences. The hope for the capital markets of course is that the two economic superpowers can work out a tangible trade deal, which could send the markets higher globally.

The trade wars between the United States and China have typically been marked by volatility as soon as news of tariffs hit the media outlets. Emerging markets, in particular, have been susceptible to downward swings as a result of the trade wars.

“We do not have evidence that a meaningful cyclical low is in place, and the character of any rally attempts that do emerge will be watch closely,” said Bruce Bittles, chief investment strategist at Baird.