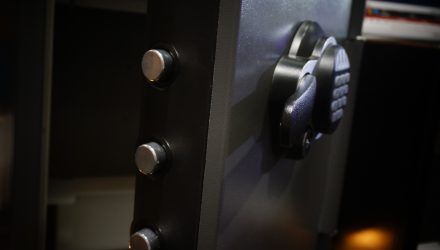 The 2018 performances of XLF and rival financial services ETFs are undoubtedly disappointing for investors that bet the sector would rally against the backdrop of rising interest rates. The Federal Reserve has boosted borrowing costs three times, moves many market observers believed would lift the fortunes of the rate-sensitive financial sector.

“Outflows from the $21 billion Financial Select SPDR Fund, or XLF, are driving the record $9.2 billion that’s been pulled from all ETFs tracking financials this year,” reports Bloomberg. “Traders have also been closing out their bets in the $2.7 billion SPDR S&P Regional Banking ETF, which tracks an equal-weighted portfolio of banks stocks. XLF is more diversified, with 49 percent of its holdings in banks, and about 32 percent in insurance companies.”

Bank stocks are ending a rough year in a downward spiral. XLF is down more than 11% this month and has a fourth-quarter loss of 15.62%, which essentially accounts for all of the fund’s year-to-date loss.

“Financials are the worst performing among 11 S&P 500 industry groups in December, falling 16 percent in the midst of pressures ranging from disappointing loan growth to a flattening yield curve to slowing global growth,” according to Bloomberg. “The KBW Bank Index is down 19 percent this month and is on track for a 21 percent decline this quarter, which would be its worst since a 27 percent decline in the three months ended September 2011.”

Other factors may be hampering the sector. Some market observers warned that banks may even be cutting back on lending as bankers are becoming more concerned over the late-cycle U.S. economy. Indicators such as credit-card charge-off rates have increased, though the rate leveled off over the summer.

Investors have pulled $4.82 billion from XLF in the fourth quarter, the largest outflows among all US-listed ETFs. KRE has seen $1.23 billion in fourth-quarter outflows.