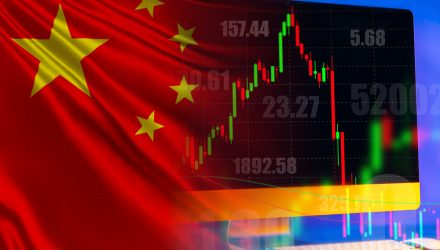 Investors Are Hesitant on Doubling Down on China ETFs’ Rebound

China internet names and related ETFs have been among the hardest hit and remain down for the year. For instance, the KraneShares CSI China Internet ETF (KWEB) is 15.1% lower, and the China-heavy  Emerging Markets Internet & Ecommerce ETF (NYSEArca: EMQQ) is down 19.6% in 2022.

The China ETFs only recently bounced back after Chinese vice-premier Liu He promised to introduce “favorable policies” to the market,” the Financial Times reports.

The promise of support from Beijing helped KWEB surge 40% in a single day of trading and brought life back to EMQQ, which at one point fell to just a third of its all-time high in February 2021.

“It might have been the darkest day in my professional life,” Kevin Carter, founder and chief investment officer of EMQQ, told FT.

The recent gains have not been enough to pare the damage over the year due to concerns over an economic slowdown from strict Covid-19 lockdown measures in response to a surge in new cases.

Nevertheless, Carter argued that the fundamentals remain sound. Specifically, he believed that emerging market internet and e-commerce companies in the developing world, including China, remain in a strong position to capitalize on the growing middle-income class. The aggregate revenue growth of the companies in EMQQ’s portfolio was 35% in 2021 and is projected to be 20% in 2022.

On a fundamental basis, “the story hasn’t changed much at all,” Carter told FT, adding that e-commerce and internet penetration in the developing world is still much lower than in developed economies.

Xiaolin Chen, head of international at KraneShares, believed that investors, though, are not interested in the fundamentals and have instead focused on the macro picture.

Analysts at JPMorgan noted that China internet investing is still marred by the potential delisting of Chinese companies’ American depository receipts, and burned investors are loath to return.

“We believe the SEC announcement has triggered investors to reassess China’s geopolitical risks, which has led to significant fund outflows from the internet sector as global investors rebalance their global capital allocation,” the analysts wrote in a recent report.