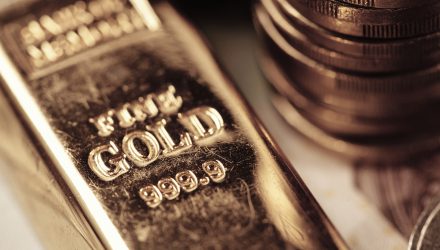 Investors Are Flocking to Gold ETFs

With the dollar continuing its slide from 2017, gold is off to a solid start in 2018. The SPDR Gold Shares (NYSEArca: GLD), iShares Gold Trust (NYSEArca: IAU) and other gold-backed exchange traded products are up close to 3% this month.

Importantly, January is often one of the best months of the year in which to be long gold. Gold has enjoyed greater demand in a low interest-rate environment as the hard asset becomes more attractive to investors compared to yield-bearing assets. However, traders lose interest in gold when rates rise since the bullion does not produce a yield. Interest rates remain low in many developed markets and some emerging markets have been rapidly lowering borrowing costs this year.

Investors are taking note of gold’s shine early in 2018.

GLD “holdings climbed to 2,250 tons on Monday, the highest since May 2013, according to data compiled by Bloomberg. The rise in ETFs comes after the metal’s best year since 2010 and as bulls are bolstered by a weakening dollar,” reports Bloomberg.