You are at:Home»Expert Insights»Investing in China: A Conversation with Jason Hsu of Rayliant Global Advisors 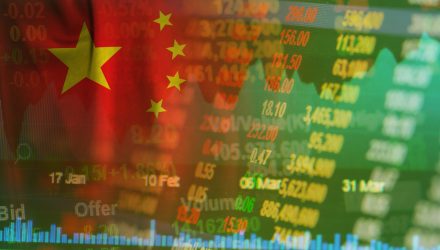 Investing in China: A Conversation with Jason Hsu of Rayliant Global Advisors

Rayliant Global Advisors is a relatively new investment firm founded by former Research Affiliates co-founder Jason Hsu. Dave Nadig, Director of Research at ETF Trends, sat down with Jason to talk about the firm’s unique approach to investing in China.

Dave Nadig: Hello Jason. Let’s start at the beginning, with Research Affiliates. You had an interesting journey there.

Jason Hsu: I was training as an economist, studying financial markets and the macro economy. It was just a random coincidence that I met up with Rob Arnott (Research Affiliates Co-Founder) as he was transitioning out of First Quadrant. He had just completed the sale of the company to AMG and was looking for his next big thing. We got together at UCLA and decided to start Research Affiliates. This was 2002.

Dave: Gosh, was it that long ago? Wow.

Jason: Rob obviously has a phenomenal network. He knows so many people and really knows the business. There was no better person to learn from. I brought things that I developed in academia. It happened to be the right combination of skills at that point in time for the market. Back then, factor investing was not a thing.

We embedded an academically-vetted return driver into this low-cost chassis. And the marriage of that I think was a phenomenal innovation.

Dave: So, what was the impetus to make this change? To start doing a little bit more of your own thing, although, you were a co-founder there and you’re a founder here. What are you doing now that’s different at Rayliant?

China is absolutely emerging, but it’s probably the world’s greatest underexposure. The size of that economy, the footprint that it could be in standard benchmark indexes, the opportunities are too large to ignore. So I told Rob, “Hey, I think I want to skate to where the puck will be, and the puck is going to be in China.”

Dave: There are a lot of China funds in the market now. What about your approach is different enough to make you start a new company?

Jason: All of us, our skin in the game is really betting our career on the emergence of China, and more importantly, the emergence of its importance in global asset allocation portfolios. Our firm is all in. It’s all we do. If there is a case to be made for active management, China is it. You’ve got 85% retail trading. In very few other markets can you claim that there are so many willing and repeat losers of a zero-sum game. It’s a market where disciplined, sophisticated, active investors can win, and can win consistently. There are really few other significant markets where that claim makes any sense. Certainly not in the U.S. where retail is less than 3% historically.

The opportunity is so much larger. It’s more than taking standard factors like value and size and saying, “Hey, it doesn’t work in China.” It does, and it works well, but there’s just so much more, and this is what we at Rayliant call “localizing our research.”

Dave: What do you mean?

Jason: Well, we’ve been in China since the Research Affiliates days, gathering data, learning about the data, cleaning data, working with data. We’re a decade ahead of the global quants of today with how clean our data is and how well we understand it. We use unique data sets that people haven’t even heard of, and understand how to process and build models from them.

Dave: But isn’t all this data just everywhere now?

Jason: I think our unique advantage is in just having more data, cleaner data, and more exclusive private data that others can’t find. The other part of course is once you have data, then you’re able to do all sorts of interesting econometrics—quantitative things. U.S. Research universities don’t really research Chinese securities. So some insight can be borrowed, but you have to localize that, and to localize it, you must understand that market. You have to have been in that market for a while. You must have a lot of researchers that really train in China and can collaborate with your U.S. team.

Dave: When did you start putting a team together once you left Research Affiliates? Were you already in process? Were you dual streaming? What was that like?

Jason: Yeah. Under the Research Affiliates banner, we were already in China since 2009, partnering with two stock exchanges and launching multifactor indexes and ETFs in China. We were already ahead of the competition in 2009 and had a team in China, had an office in Hong Kong, and had partnerships. Really, by the time we spun out of Research Affiliates in 2016, we were ready with everything.

There was some cross-ownership initially. Then it was fully spun out.

Dave: Can you give us an anecdotal example of something you’re looking at that your competitors probably don’t even know exists?

Jason: There are a few! Here’s one: very few people would think the exchanges would give you anything other than basic information people file with the exchanges. That’s because that’s just how the U.S. exchanges work. What we realized is that exchanges in China don’t work that way. Exchanges in China are very paternalistic. They’re worried about bad stocks being listed, so they actually have a whole team of almost sell-side analysts—except they don’t sell anything.  They write letters to companies and say: “We heard your CEO say this. We looked up your filing. We actually went and pulled up some data and things don’t line up. Would you like to explain?” They’re called the exchange letters. They’re volumes and volumes of long-form text you must read in Chinese to pull out.

Dave: It’s almost like quasi regulatory super-surveillance, but from an exchange, not a regulator.

Jason: Exactly. The exchanges just do it, and so if you pull that information together and scrape that data, you’ll get a lot of extra information that is just not available through terminals or through any other source. You have to realize that the exchanges in China have this additional function that doesn’t exist anywhere else in the world.

Here’s a concrete example. A company filing might say a given building project was complete. But then, in the financials, it will show it’s still under construction, so there’s obviously a disconnect.  When there’s something like that that doesn’t connect, an exchange analyst will go and say, “Look, you represented this as a completed project yet you’re still holding it on the books as in-progress.”  And that feeds the process.

Similarly, there’s a lot of discussion around how all Chinese state-owned-enterprises (SOEs) are bad.  But you can’t just look things up on a list.  You’ve got to look at who works at a company.  So we do.  We were able to find a firm that does biographical information for key executives, and it actually does give you enough granularity to see if they held ranks within the party. That’s a very clear connection you can then use to sort all the firms by senior management party affiliation. You’re probably not surprised that if your company leadership is from Beijing (even if your firm isn’t necessarily ‘state-owned’), your firm performs super well, but if you’re a local township, there’s probably a lot more incompetent mismanagement, and a lot more nepotism that occurs in the hiring process. At the end of the day, they grossly underperform. People don’t have access to that data because that doesn’t exist in the U.S.

Dave: But when we think about the fund as a portfolio, not just individual companies, how should we think about it? Is it core beta for China?  Is it high conviction active?

Jason: Core beta plus alpha-seeking active. We’re diversified and fully invested. You’re going to get that beta, but we’re going to make sure you’re buying the firms that are the best quality. They’re all growth stocks. So clearly, we’re not anti-growth, but we want to make sure we’re buying growth stocks at sensible prices. While we’re not sector neutral in forming our quantitative active portfolios, we realized very concentrated bets like, for example, having no banks, would be a very concentrated bet. So we wouldn’t be without banks except for some extreme circumstance.

Dave: Got it, so beta and beyond. And with a strategy you’ve been working on for some time.

Jason: Absolutely. We’ve been launching ETFs with partners in China and Hong Kong and recognize that those successes can translate easily into success in the U.S. We’re aiming to be the core allocation for  investors who are looking to put China into their portfolio.